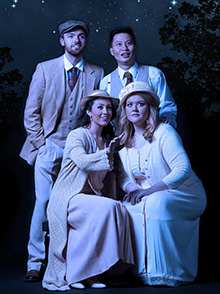 When Yale Opera honcho Doris Yarick-Cross signed a director for the School of Music’s big February production, she didn’t just get a big name, but one with a pedigree that, it turns out, inspired the show’s Norwegian conductor when he was a boy.

Director Claudia Solti is the daughter of late-great conductor Georg Solti and former BBC presenterValerie Pitts. Sir Georg is best known for his work with opera companies in Europe and as longtime music director of the Chicago Symphony Orchestra. His daughter is making her Yale Opera debut with this opera about “the fickle nature of romantic love,” as she put it.

And in a release, Yarick-Cross said she chose Bergmann because, “I was convinced that his joyous, convincing and skillful handling of the orchestra was exactly what was needed for our production.”

Claudia Solti, who still carries a proper British accent years after attending Oxford and the London Academy of Music and Dramatic Art, acted in the 1994 film “Immortal Beloved” and starred in the 2001 short film “Shotgun Wedding” (the first film she directed).

“I never had any desire to be a director,” she said in a Yale Opera rehearsal hall recently. “But when I was at Oxford, I read a play there that I had this very, very strong feeling of what it should look like. And I was kind of obsessed with the idea that, going to see a lot of theater, I found it very boring. And I wanted to be able to go to the theater and for it to be able to compete as an experience with going to a pop concert or something much more vital and young.”

She directed that play-with-music, “The Love of the Nightingale,” and felt like she’d found her thing — building up actors in collaboration instead of being “harsh and strict” like some acting teachers.

In the late 2000s, Solti wrote and directed the film “That’s for Me!” And then she began to follow more in her father’s footsteps, earning kudos directing “A Midsummer Night’s Dream” at the Mariinsky Theatre in St. Petersburg, Russia, in 2011.

Asked what she is expanding for this Yale Opera production, she said, “I think... the projection element (with Shawn Boyle). ... I’m very interested in the mix of music and visuals.”

Solti said the aim is for three things in opera: “Incredible music, incredible stories and, if you can match that visually with something extraordinary that works and flows in time with the music, then you’re on to something.”

Shakespeare’s enchanted fairy tale presents three groups of characters with largely separate plots (and contrasting sound worlds by Britten): the Fairies, led by Oberon and Tytania and including the mischievous Puck, who does Oberon’s bidding; the Royals, with Lysander and Demetrius, Helena and Hermia (it’s complicated); and the Mechanicals troupe, featuring the likes of Bottom and Quince.

Solti said she sees some themes differently now that she has children of her own. “I think there’s always a lot of discussion about... the changeling child that’s the cause of the fight between Oberon and Tytania. ... I think it’s about the sexual love between a man and the woman, a husband and wife. Once the wife has a child, that love goes toward the child and moves away from the husband.”

“This music, if you just listen to it, doesn’t make sense, in a way,” Bergmann said in the same hall off Prospect Street. “Because the sound is so connected to what you see. ... There are small melodies, but always fitting the staging.”

Bergmann, an accomplished talent himself who is quick with a laugh, said he does two or three operas a year now (compared to when he did almost all opera in Germany); that’s partly for family reasons since he has three small children in Oslo, Norway.

The rehearsal times, duration and union rules will vary from country to country, not to mention languages. But he has adapted, although it isn’t always a good fit between director and conductor of an opera.

“Anything can happen because they are both strong personalities,” he said.

He had never worked with Solti, “and I didn’t even connect the name. ... She had such a strong feeling for the music. Two days later, I found out she was the daughter of the world’s most famous conductor,” he laughed.

Bergmann came from a small town that was known for its big furniture factory. But his brother wanted to be a church organist and Rune decided, after his father woke him up to show him the New Year’s Eve classical concert from Vienna on TV, to become a conductor. He was 8.

He had to learn an instrument first (three, actually: piano, trumpet and viola), and his musical journey went from Norway to Sweden and Finland (where he studied). He said that at a young age, he would use his parents’ “candy money” to buy Solti recordings.

“So one of the biggest influences was actually her father... (who) died when I was fairly young. So I never got the chance to meet him, but now I have to say, it’s a great pleasure to work with the daughter.”

The 18-person Yale cast features the singers of the Yarick-Cross’s Yale Opera program — “super-gifted,” says Solti, and double-cast so that different actors will perform a role depending on the performance. They will be joined by the children’s chorus from St. Paul’s Episcopal Church in Fairfield.

The show runs about three hours with an intermission, Friday and Saturday at 8 p.m.; Sunday at 2 p.m. It will be sung in English and will include projected English supertitles. Tickets are $19–$50, $13 with student ID, available from the Shubert Theatre box office at 247 College St., by calling 203-562-5666, or at shubert.com.