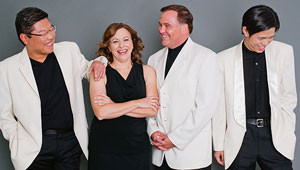 The Oneppo Chamber Music Series at the Yale School of Music presents the Miami String Quartet on Tuesday, April 5 at 7:30 pm. The quartet will perform works by Beethoven, Schulhoff, and Mendelssohn.

The program will open with Beethoven's String Quartet No. 11 in F minor, Op. 95, "Serioso," which Beethoven initially composed to experiment with compositional techniques, never intending it for public performance. The resulting work contains the initial attempts at many techniques that Beethoven would come to perfect in his later works.

Next on the program is Schulhoff's Five Pieces for String Quartet, a neoclassical work that offers a glimpse into two eras by layering the spiky dissonances and rhythmic drive of the avant-garde atop an ornate baroque dance suite.

To close the program, the quartet will perform Mendelssohn's String Quartet in F minor, Op. 80, No. 6. Written during the composer's final year, the work is the last major piece completed.

The Miami String Quartet has appeared extensively throughout the United States and Europe. Highlights of recent seasons include performances in New York at Lincoln Center’s Alice Tully Hall and the Kennedy Center in Washington, D.C., as well as engagements in Boston, Indianapolis, Los Angeles, New Orleans, San Francisco, Seattle, St. Paul, and its own concert series in Palm Beach, Florida. International highlights include appearances in Bern, Cologne, Amsterdam’s Concertgebouw, Istanbul, Lausanne, Montreal, Rio de Janeiro, Hong Kong, Taipei, and Paris. The Quartet has recently toured with the Chamber Music Society of Lincoln Center and they perform frequently for the Philadelphia Chamber Music Society.

The Miami String Quartet is in demand at many of the country’s great festivals. For many years, the Quartet has served as resident ensemble at the Kent/Blossom Music Festival in Ohio, and has appeared at Chamber Music Northwest, Mostly Mozart, Ravinia, the Brevard Festival, Rutgers Summerfest, Music from Angel Fire, Virginia Arts Festival – where it has been the resident ensemble – and at the festivals of La Jolla, Santa Fe, and Pensacola.

The Miami String Quartet’s first recording, the first two quartets of Alberto Ginastera, was released in 1994. Their second CD, Saint-Saëns Quartets Nos. 1 and 2 and Faure’s String Quartet, was released in the fall of 1997 on BMG Conifer. The aforementioned 1999 BMG recording of Peteris Vasks’ Quartet Nos. 1, 2 and 3 garnered unqualified praise on both sides of the Atlantic. Azica Records will released their recording, with the Kalichstein-Laredo-Robinson Trio, in 2014. Their recording of Joan Tower’s quartets Angels and Incandescent is due out in 2015. In 1992, the Miami String Quartet became the first string quartet in a decade to win First Prize of the Concert Artists Guild New York Competition.