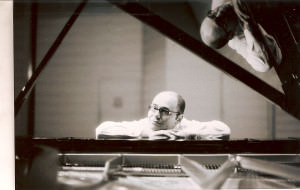 Vadim Serebryany '00 MMA '06 DMA has been appointed Assistant Professor of Piano in the School of Music at Ithaca College. Serebryany will join fellow YSM alumnus and pianist Dmitry Novgorodsky, who joined Ithaca's faculty in April 2015.

About Vadim Serebryany
Vadim Serebryany has been acclaimed by audiences and critics on five continents for his sensitive and intelligent music making. He has been highly sought after as a recitalist, concerto soloist and chamber musician, and has performed in Europe, South America, Australia and throughout North America. In recent seasons Mr. Serebryany has embarked on many interesting and challenging projects, including performing the complete Beethoven sonatas for piano and violin, as well as presenting various solo and chamber works of the Second Viennese School composers in creative programs. In recent seasons, he has been a guest soloist with the National Arts Center Orchestra, The Kingston Symphony, the Osaka Century Orchestra, and Montgomery Symphony Orchestra.

Mr. Serebryany has collaborated with such prominent artists as choreographer Mark Morris, Baritone Gary Reylea, cellists Suren Bagratuni and Eugene Osadchy, violinists Mayumi Seiler, Almita Vamos, and Yosuke Kawasaki, and members of the American String Quartet, the Enso Quartet, and the Glenn Gould String Quartet. In 2007 he and Mr. Kawasaki made their recital debut at Carnegie Hall.

An Honours graduate with Distinction from the Royal Conservatory of Music in Toronto, where he was a student of Marina Geringas, Vadim went on to complete his Bachelor's and Master's degrees at The Juilliard School, under the tutelages of the legendary Russian pianist Oxana Yablonskaya and the esteemed American pianist Jacob Lateiner. The final leg of Mr. Serebryany's formal education took him to Yale University, where he completed his studies in the prestigious Doctor of Musical Arts program under the brilliant Russian pianist and teacher Boris Berman.

From 2005 to 2008 Mr. Serebryany served as Artist in Residence at La Sierra University in Riverside, California, and has also served as a visiting professor at Lawrence University. Since September, 2008. Mr. Serebryany has been an Associate Professor of Music at Huntingdon College in Montgomery, Alabama. In 2015, he was named Huntingdon’s first ever Belcher-Cheek Artist in Residence.