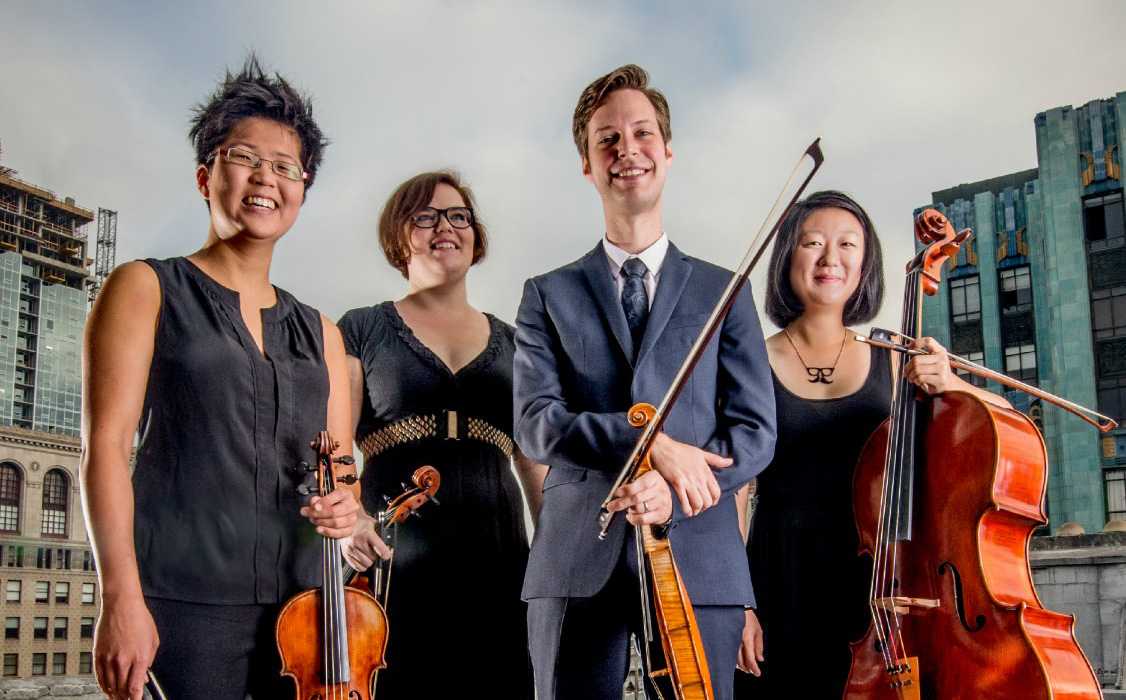 The Argus Quartet, current fellowship quartet-in-residence at the Yale School of Music, will perform at Carnegie Hall's Zankel Hall on April 15. The concert is part of the Kronos Quartet's weeklong workshop for young professional string quartets to explore new works. These works are commissioned as part of Fifty for the Future: The Kronos Learning Repertoire, a major commissioning initiative devoted to the most contemporary approaches to the string quartet.

The workshop culminates in the Zankel Hall performance, which also features selections from one of Kronos’ signature works, Terry Riley’s Salome Dances for Peace. In addition to the Riley, the concert includes music by Fodé Lassana Diabaté, Garth Knox, and Wu Man, and the Friction and Ligeti Quartets will also perform.

About the Argus Quartet
The Argus Quartet is dedicated to reinvigorating the audience-performer relationship through new and innovative concert presentations of diverse repertoire – connecting with and building up a community of engaged listeners is at the core of the quartet’s mission. Formed in the summer of 2013, Argus is receiving invitations from concert series throughout the United States and abroad. Recent performances include appearances at Carnegie Hall, Laguna Beach Live!, Encinitas’ Music By The Sea, the Hear Now Music Festival, Music Academy of the West, the Birdfoot Festival, and the Cello Biënnale Amsterdam. The quartet has also won several competitions including the Beverly Hills Consortium and the MTAC San Diego Competition.

Beyond its commitment to performing chamber music at the highest level, Argus aims to engage audiences in unique ways. This fall marks the inaugural season of Argus in LA, a concert series that reimagines many aspects of the traditional concert experience.  These handcrafted presentations have something for everyone: eclectic programming, world premieres, and exciting guest artists.

Education and outreach are an important part of the Argus Quartet’s mission. In addition to their teaching responsibilities at Yale, next season includes residencies at the Milken School, California State University Long Beach, and the Birdfoot Festival. The members of the quartet are Jason Issokson and Clara Kim, violin, Diana Wade, viola, and Joann Whang, cello.