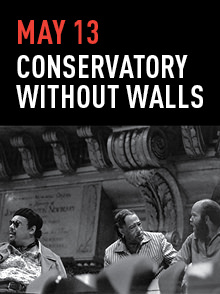 Willie Ruff, the music faculty member at Yale who was playing jazz with the greats back when there were dance halls in many towns, is jazzed up about Friday’s event at Morse Recital Hall that will pair a TV documentary with a live performance.

The 7:30 p.m. event, titled “Conservatory Without Walls,” begins with a “lost” video documentary originally created by WTIC-TV in Hartford, later to become WFSB-3. After intermission, 11-year-old drum prodigy Kojo Odu Roney will take the stage with the Antoine Roney Trio: saxophonist Antoine Roney (Kojo’s father), guitarist Billy “Spaceman” Patterson and bassist Rashaan Carter. “I just learned of the existence of (the documentary),” said Ruff in a phone chat. “Actually, it was two half-hour shows that John Sablon and Brad Davis (had done).”

Ruff, 84, said there was a constellation of jazz stars at the event, which he organized in 1972 and led to the Ellington Jazz Series that includes this event. “It was Duke Ellington and his whole orchestra, and 39 other people — Dizzy Gillespie, Max Roach, Ray Brown, Slam Stewart, Cootie Williams,” said Ruff. “It was 40 individuals being honored by the university with an Ellington medal. And they stayed on the campus here; actually, the events on campus lasted three days...”

Ruff said the TV station’s crew was bowled over by the talent present. “They were overwhelmed by all those people assembled. So while Duke’s band or Eubie Blake ... was playing on the stage at Woolsey Hall, they had cameras on them and cameras downstairs in the dressing room, where they were interviewing Dizzy Gillespie and Stanley Dance, the (jazz) journalist.”

Ruff and organizers had been forbidden from making a documentary for copyright reasons, but “you can’t copyright the news, so these two TV men working together and separately made a half-hour show and they had so much material left that they made another half-hour show.”

Ruff said the 1972 videotape was discovered by an archivist recently, but there was “hardly anything you could play it on.” So Yale’s Film Study Center sent the material to a California company to digitize it. And folks there were too young to know who was in the film, so Ruff was called in to help out, and he discovered a bit of lost treasure.

Ruff said the gathering at Yale was the inaugural event of the Ellington Jazz Series at Yale, which began with Ruff’s pitch to then-President Kingman Brewster, aided by Yale’s awarding Ellington an honorary doctorate about four years prior to that. “I said, ‘This is the opportunity for the university to recognize what I call the Conservatory Without Walls, that invisible institution through which African-American music has developed in the United States...’ It came from the people, from one generation to the other. And I said that Duke Ellington stands at the pinnacle of that informal institution; he could be identified truly as the dean of that conservatory.

“The documentary was really like a found gift, and that really presents the audience with a sense of our history. Now this 11-year-old drummer is really a symbol of hope for the future. ... He’s something else.”

And this event — with its look back and forward — serves as the Ellington Series season ender in 2016.