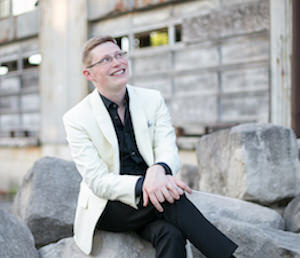 Conductor Dominick DiOrio '08MM, '09 MMA, '12 DMA was recently promoted to the tenured rank of Associate Professor of Music in choral conducting at the Indiana University Jacobs School of Music. At age 31, he is the youngest member of the school's conducting faculty to achieve this rank.

Additionally, DiOrio was selected by the American Choral Directors Association (ADCA) to participate in their International Conductors Exchange Program with Sweden, where he gave a presentation on new choral music at the Nordic Choral Conference in Malmö alongside fellow YSM alumna Kimberly Dunn Adams '05 MM. They will repeat this presentation at the 11th World Symposium on Choral Music, held in Barcelona, Spain in July, 2017.

More about Dominick DiOrio
The music of young American composer Dominick DiOrio has been called “a tour de force of inventive thinking and unique colour” (Gramophone) and “[full of] sunny rays of heavenly light” (Opera News). In 2014, he was named the winner of The American Prize in Composition with the judges saying "his depth of vision, mastery of compositional technique, and unique style set him in a category by himself."

Also an accomplished conductor, DiOrio has guest conducted ensembles both domestically and abroad including the Young People's Chorus of New York City, the University of Maryland Chamber Singers, the University of Hawai’i Choirs, Allmänna Sången, Ars Veritas (Göteborg), and the Houston Chamber Choir. He made his Carnegie Hall conducting debut in February 2012 as an invited fellow of the Carnegie Hall Choral Institute. In October 2009, he was one of only twelve conductors in the world invited to Sweden to compete for the Eric Ericson Award, the premier international competition for choral conductors. He was also a finalist in the 2005 American Choral Directors Association (ACDA) Undergraduate Conducting Awards in Los Angeles.

As part of his duties at the Jacobs School, DiOrio directs NOTUS, an elite chamber chorus that specializes in performing and commissioning new music of living composers. Under his leadership, NOTUS has performed at both regional and national American Choral Directors Association (ACDA) conferences and as an invited ensemble on the Distinguished Concerts International New York Artist Series at Carnegie Hall.

As a composer, he has seen recent commissioned premieres by the Princeton Glee Club, the Kansas City Chorale, and the University of Cincinnati College-Conservatory of Music Chamber Choir. His music has been performed in the United States by eighth blackbird; Seraphic Fire; and the University of Maryland Chamber Singers, as well as internationally in Austria; Canada; China; Sweden; and the United Kingdom.