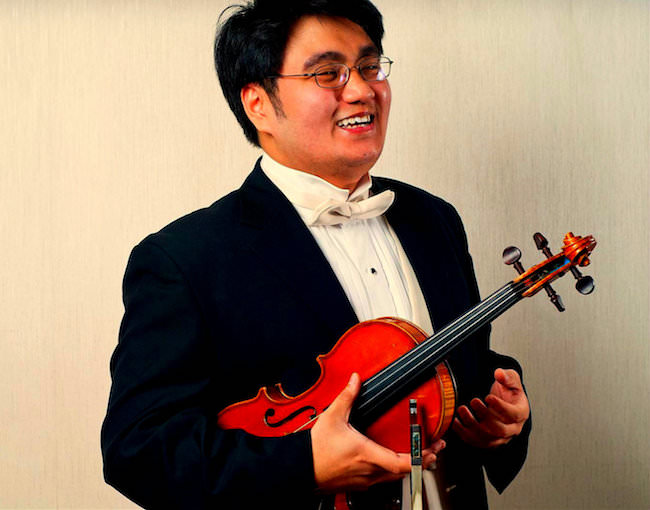 Violinist Diomedes Saraza Jr. '17 MMA will make his Carnegie Hall debut on June 18th, 2016. Saraza will perform the Sibelius Violin Concerto with the Philippine Philharmonic Orchestra, which will also be making its Carnegie Hall debut, under the baton of Olivier Ochanine.

The concert aims to bring pride to Filipinos living in the United States, and to celebrate the Filipino spirit through music. Proceeds from the concert will be given to the Philippine Disaster Relief Corporation to assist with the organization's housing projects.

More About Diomedes Saraza Jr.
Born to a family of musicians, Diomedes Saraza Jr. first showed interest in the violin at the age of three and began his studies on the instrument with his father. He began formal lessons at the age of five, studying under Virna Valerio at St. Scholastica’s College of Music (Philippines), and later with Basilio Manalo and Arturo Molina.

Saraza made his solo recital debut at the Cultural Center of the Philippines and at the Pasig Music Festival, and in 2002, won first place at the National Music Competition for the Young Artists. In 2003, he made his concert debut “The Gift” at the CCP and was awarded to be one of the best performances for 2003 in the Philippines.

He moved to New York to pursue his studies in violin in the Mannes College Preparatory Division under the tutelage of respected violin pedagogue, Dr. Chin Kim. In 2008, He won the Mannes Concerto Competition granting him the opportunity to a performance with the Mannes Philharmonic under the baton of  Mr. Michael Adelson. Later that year, he became the concertmaster of the Mannes Philharmonic. Saraza has performed with the New York Symphonic Arts Ensemble at Julia Richman Auditorium in New York and was a prizewinner of the Juilliard Schools’s William Schuman Competition and was also featured in Juilliard's all-sonata concert “Sonatenabend”.

Aside from his achievements in music, Diomedes was the first Filipino chosen as a recipient of the Outstanding Academic Achievement Award for President Obama's Education Awards Program. He was also a member of the National Honor Society throughout high school and was part of the Varsity Math team for three consecutive years. In addition, he was named one of the "11 Awe Inspiring People of 2011" by Inquirer Lifestyle, Philippines.