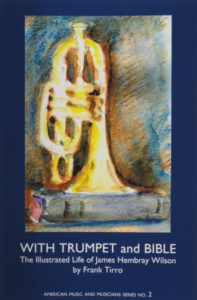 Former Yale School of Music Dean and Professor Emeritus, Frank Tirro, will give a talk on his most recently published book With Trumpet and Bible: The Illustrated Life of James Hembray Wilson (Pendragon Press, 2015) on Sunday, June 5.

This event, hosted by Bookworks -- a locally owned, independent bookstore in Albuquerque, NM -- will include a book signing.

More About the Work
What was life like for an African American raised in the South in the 1880s? Were there paths to education and success for Black Americans facing the terrible prejudicial environment in the states that lost the War Between the States? And issues concerning the status of Black women surface, too. What kind of life and what possible hope might they have during the years before World War I to the years after the Second World War?

Exploring these questions and illustrating one Black man's life are but some of the many threads that Frank Tirro weaves into the fabric of his fascinating biography, With Trumpet and Bible. This compelling story is the documented account of a talented, intelligent, and ambitious African-American musician, James Hembray Wilson, a man who faced the challenges of his day and succeeded, despite his modest education and limited financial resources, and became one of the most respected and idolized professors of a vital Historically Black College in the South. Working hand-in-hand with Alabama A&MAEs first four presidents, teaching courses as diverse as Rhetoricals, Band, and Bible Study, and serving as Postmaster, Bookkeeper, and, finally, Treasurer of the college, Wilson guided generations of young African Americans to the brink of the civil rights struggles of the 1950s and 60s. His is an American tale that weaves together the history of the shocking inequalities of our educational system, the dawn of the civil rights movement, and the flowering of the African-American musical tradition.

More About Frank Tirro
Frank Tirro is a music historian and former Dean of the Yale School of Music. He worked his way through college playing swing and bebop, and he earned a bachelor's degree in Music Education, a master's in Theory and Composition, and a Ph.D. in Renaissance musicology.

He composed and published the first jazz mass in 1959, the American Jazz Mass, and this work received much attention and numerous performances worldwide, including Europe and Canada. He played and toured with the Jimmy Phillips and Johnny Palmer Orchestras and performed occasional concerts with jazz artists Mary Lou Williams, Clark Terry, Willie Ruff, Dwike Mitchell, and Donn Trenner. With Palmer's Orchestra he backed shows for such diverse artists as Harry Bellafonte, Chubby Checker, and Anna Marie Alberghetti.

On the classical side of the ledger Tirro has played clarinet in public recitals with well known artists Aldo Parisot, Sidney Harth, Erick Friedman, Arthur Weisberg, Ronald Roseman, and others, and the repertoire runs from Mozart and Beethoven to Hindemith and Tirro. The photos show him playing Mendelssohn duets with Benny Goodman, the Mozart Clarinet Quintet with Sydney Harth, soloing on Tenor Sax with the Tuxedo Junction Orchestra, and jamming in concert with Willie Ruff, Dwike Mitchell, and Ed Soph.

Tirro's first book, Jazz: A History, was very influential and became a standard textbook. His most recent book, The Birth of the Cool of Miles Davis and His Associates, was nominated for the Association for Recorded Sound Collections Award for Excellence in Historical Recorded Sound Research.