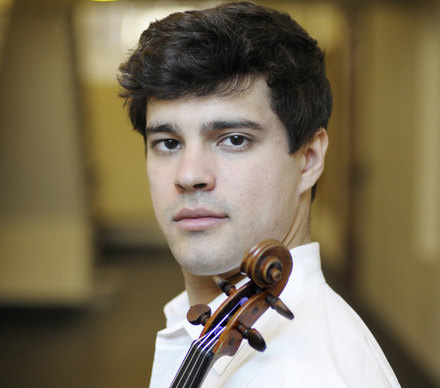 Domenic Salerni '11 MM has been appointed first violinist of the Dalí Quartet, an ensemble that is known particularly for its excellence in Latin-American repertoire.

Furthermore, as a part of the septet Foundry, Salerni and YSM alumni Ian Rosenbaum '10 MM '11 AD, Andy Akiho '11 MM, and Samuel Suggs '14 MM, won second prize in the M-Prize Chamber Arts Competition in the open division. Foundry is an ensemble that crosses and transcends genres, innovating new sounds through the synthesis of contemporary classical techniques and jazz, reggae, Caribbean, and Soca.  The M-Prize Competition (through the University of Michigan's School of Music, Theatre & Dance) awarded Foundry $7000.

More About Domenic Salerni
Domenic Salerni is the recently-appointed first violinist of the Dalí Quartet. He moved up to Philadelphia from the Atlanta area, where he served on faculty as instructor and first violinist of Emory University's quartet-in-residence, the Vega String Quartet. He was also a member of the Riverside Chamber Players, and concertmaster and soloist with the Atlanta Community Symphony Orchestra.

Domenic can be found on numerous CDs and albums, including "Touched: A Decade of Chamber Music" featuring the works of his father Paul Salerni, "No One To Know One," NewYork-based composer Andy Akiho's debut album, and NY performance artist and cellist Jacob Cohen's self-produced EP "The Odyssey." A collaboration with violinist Andres Cardénes, pianist Elizabeth Pridgen, and the Vega Quartet is forthcoming.

Domenic holds degrees from the Cleveland Institute of Music and Yale School of Music, where he studied with Linda Cerone, William Preucil, and Hyo Kang, respectively. He received Academic Honors from CIM and was a winner of the Yale Chamber Music Society Competition.

Domenic has written film scores to Giuseppe di Liguorno's 1911 silent film "Dante's Inferno," which was premiered in 2010 with composer Samuel Carl Adams on bass, and "The Maltz Museum: An American Story," premiered at the Cleveland Clinic in 2012, featuring cellist Erica Snowden.

Domenic was featured in ArtsATL's "30 Under 30," was a semifinalist in the 2015 Schadt String Competition, and was a laureate of the 2009 Sion-Valais International Violin Competition.

He plays a 2014 Jon Van Kouwenhoven violin and continues to compose and arrange in his spare time.