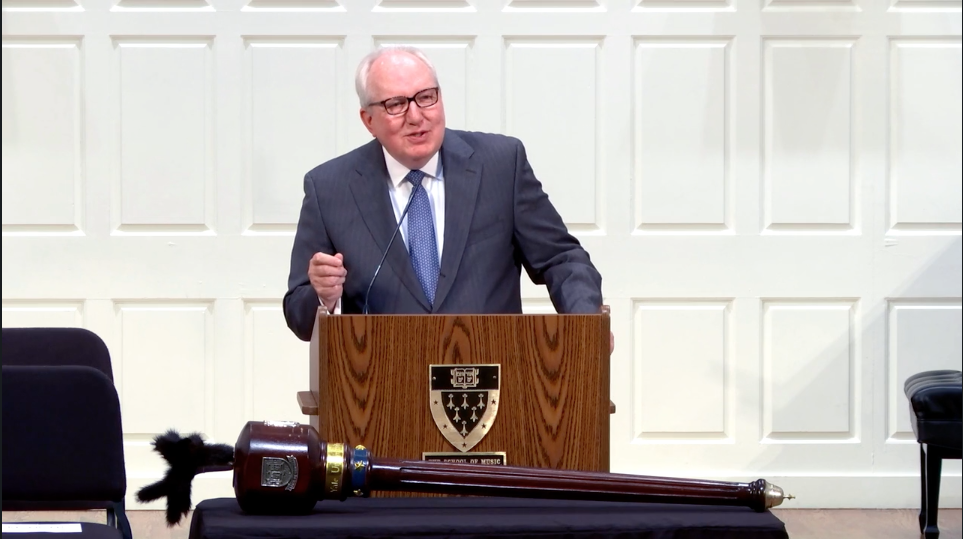 In his Convocation address, titled Music: A Transcendent Yale Legacy, School of Music Dean Robert Blocker told incoming and returning students, faculty, staff, and guests that "transcendent qualities are born and nurtured by people. Yale University and the School of Music are a collection of voices, a community and society of mutual learners. We, along with our predecessors, came here to better prepare ourselves to repair the world.

"It may surprise some of you to know that when the Yale Corporation voted to establish a School of Music in 1894, they also approved a Bachelor of Music degree that was open to women and men," Blocker said in his remarks during the September 8, 2016, ceremony. "Cynics might say that not offering a Bachelor of Arts in Music retained the exclusivity of Yale College as a male enclave, but I find it a lot more interesting and compelling that music was Yale’s very first commitment to diversity and inclusivity."

Celebrating the "transcendent voices" that have shaped the School's legacy, Blocker recognized Ellen and Carl Stoeckel, Helen Hagan, Elaine Toscanini, Aldo Parisot, and Willie Ruff, among others. "These transcendent musical voices of Yale and their cultural leadership transform lives, enrich communities, and bring hope to a broken world," Blocker said. "Yale’s sons and daughters entrusted some of humankind’s treasures to us so that the transcendent qualities of character and mind, of light and truth – Yale's motto, lux et veritas – can live through each of us and can bring hope to our planet. That is our responsibility, and it is our joy."

As much as he was talking about the past, Blocker was looking to the future, which rests in the hands of the next generation of cultural leaders – represented by the School's incoming and returning students. The entering class, whose members Blocker pointed out come from five continents, 22 countries, and 20 states, was formally installed by Yale University Provost Benjamin Polak following Blocker's emotional presentation, to School of Music Associate Dean Michael Yaffe, of the Cultural Leadership Citation. 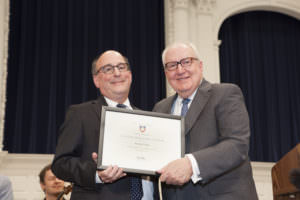 "Ten years ago, when Michael came to Yale from The Hartt School, his reputation as a passionate advocate for music as the birthright of all humanity – regardless of race, creed, economic station in life – was well known throughout our profession," Blocker said. Referencing Yaffe's leadership over YSM's Music in Schools Initiative, Blocker said Yaffe has "steadily refined and developed this program into a national model that exemplifies diversity, inclusivity, and the power of music in our lives."

The Cultural Leadership Citation recognizes Yaffe for working over the course of decades – at the National Association of Schools of Music, the National Guild for Community Arts Education, The Hartt School's Community Division, and the Yale School of Music – to make music more accessible to everyone and championing the important role music plays in our society.

Upon receiving the award, which comes as he plans the 2017 Yale Symposium on Music in Schools – which will focus on ensuring that music-making is present and healthy in all of America's urban schools – Yaffe issued a challenge to students. "What I would like to do when you graduate from here is hand this award to you, because what this is really about is cultural leadership," he said. "It has to do with making a difference through your music, doing more than standing on the stage and playing beautiful music, doing more than practicing hard, doing more than doing auditions to get into orchestras, opera companies, and other such places. We all, who make music, have an unbelievable gift, and at this point in the world's history, with all sorts of things happening in our country and all throughout the world, I want you to know that you can each provide cultural leadership through your music." 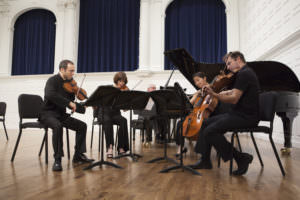 While the first half of the Convocation program celebrated accomplishments and responsibilities, the second half showcased the remarkable talents of several who've made the School their musical home. The Brentano String Quartet – who, with Blocker on piano and students, faculty, and staff singing, played Schubert's "An die Musik" earlier in the evening – performed two movements of Haydn's String Quartet in E-flat major, Op. 20, No. 1. 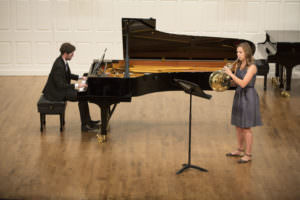 Horn player Leelanee Sterrett '10MM, a member of the New York Philharmonic, and current DMA-candidate pianist Yevgeny Yontov '14MM, returned to Yale to perform two movements of Hindemith's Sonata for Horn in F major. And student pianist Kaisaier Ainiwaer '17MM punctuated the program with a performance of the first movement of Prokofiev's Piano Sonata in A major, No. 6, Op. 82.

Fittingly, just moments earlier, Blocker had pointed out that "great music is transcendent, touching us centuries after the composer filled a blank page with notes."