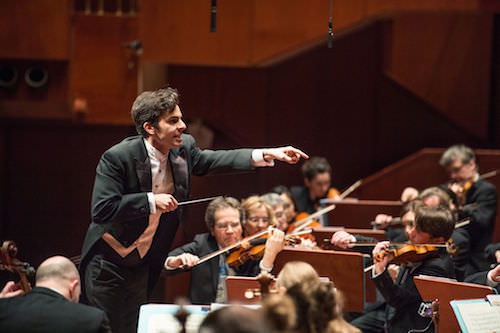 Farkhad Khudyev '10MM was named the third prize-winner in the 8th annual Sir Georg Solti International Conducting Competition on February 16, 2017. Khudyev was one of 22 aspiring young composers selected from a pool of nearly 300 applicants to participate in the live rounds of the competition, and his 3rd place finish earned him the opportunity to conduct the Frankfurt Radio Symphony in addition to cash prizes.

"It felt incredible conducting one of the best orchestras in Europe and performing for the German audience," Khudyev said. "I could strongly feel the traditions and the culture of the orchestra." Khudyev's performance of Weber's Oberon Overture in the final round was praised by the Frankfurter Neue Presse as "graceful, very sensitive, with almost magically bright winds."

Khudyev has been the recipient of the “Best Interpretation Prize” at the 1st International Taipei Conducting Competition in Taiwan, the Grand Prize and Gold Medal at the 2007 National Fischoff Chamber Music Competition, and the recipient of the Glenn Miller Competition Prize and the Neil Rabaut Prize. He has performed around the United States, Europe and Asia at world-class venues and festivals including the Kennedy Center in Washington D.C., Emilia Romagna Festival in Italy, the Alte Oper Great Hall and the Mecklenburg-Vorpommern Festpiele in Germany.