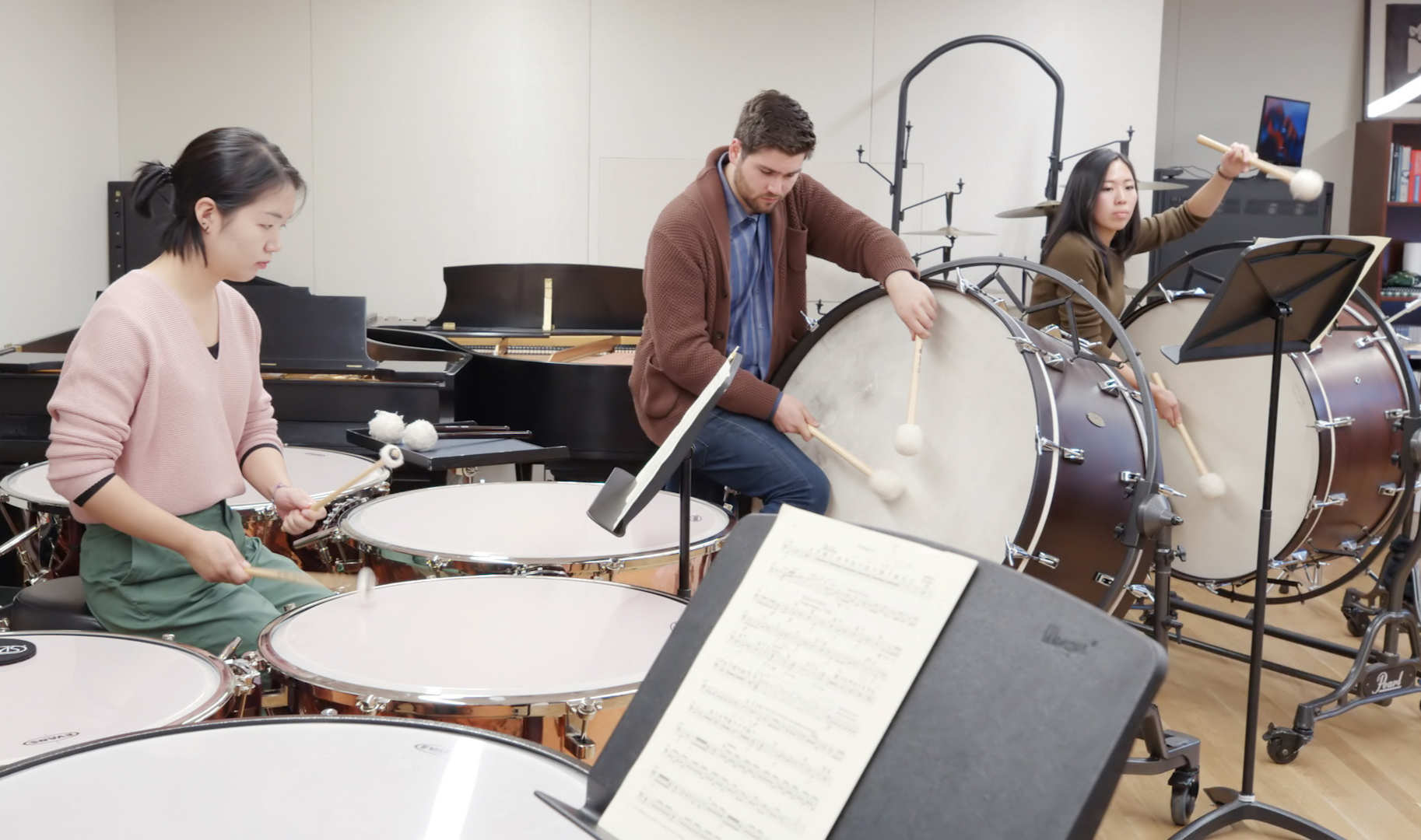 The work, a wildly imaginative piece of program music that calls for a giant ensemble including four timpanists (in the third movement, specifically), will close Friday's program and introduce concertgoers who are unfamiliar with Berlioz's score to the heights of the composer's creativity and the brilliance of his orchestration. "We can't help but remind ourselves to be sticking with the story of the music or how Berlioz was while he was writing this piece," percussionist Jisu Jung '19MM said.

The program notes (by Liam Viney, ed. Aaron Levin) for Friday's performance explain: "In the printed program of the first performance, Berlioz provided an outline of the plot: the love-sick hero (presumably himself) is plagued by images of his beloved and troubled by a spiritual sickness. He ... is constantly visited by his beloved’s image, accompanied by extreme emotional reactions. Eventually, disillusionment sets in during the third movement, and he poisons himself with opium to assuage the anguish of his unrequited love. Delirium sets in, and he descends into the horrific dream world of the fourth and fifth movements."

In Berlioz's Treatise on Instrumentation and Modern Orchestration, percussionist Russell Fisher '20MMA said, the composer "describes different instruments, he describes also the emotional responses that go along with them. You can really see that in this piece in particular." And, Jung, said, "You can see how detailed he was when he was writing this." Fisher added, "There's very little left up to interpretation."

"He even suggests sticking," percussionist YoungKyoung Lee '19MMA pointed out, which is "really rare, especially at this time." Symphonie fantastique was composed and premiered in 1830, revised thereafter, and published in 1845. As they rehearsed the timpani parts in the fourth movement ("March to the Scaffold"), percussionist Arlo Shultis '20MMA offered, "YoungKyoung's part and mine are so interlocked. Since I'm playing second timpani, I'm really watching her and watching the conductor, as well." Shultis and Lee are using similar mallets and the same stickings.

With equal attention to time, sound, and consistency, Fisher and Jung ran through their bass-drum parts in the fifth movement ("Dream of the Witches' Sabbath"), Fisher executing crescendos and Jung providing attack and decrescendos, with percussionist Kevin Zetina '20MM playing the chimes.

Discussion was had about dynamics, or course, though those will largely be up to Zeitouni, and, to a degree, to Woolsey Hall. That Zeitouni trained as a percussionist will likely factor in to how extreme those dynamics will get. "Our goal," Jung joked, "is: Play until you get the hand," the hand being a conductor's "that's too much" signal.

Returning to a more serious note, Jung said she and her colleagues (including Shiqi Zhong '19MM, who doesn't play on the Berlioz) are "very, very tight." They bring the skills required of outstanding chamber musicians to the Philharmonia. "We just develop this huge trust in each other," Fisher said.

Jean-Marie Zeitouni leads the Yale Philharmonia in a performance of Berlioz's Symphonie fantastique and music by Saint-Saëns and Debussy on Friday, Oct. 26.