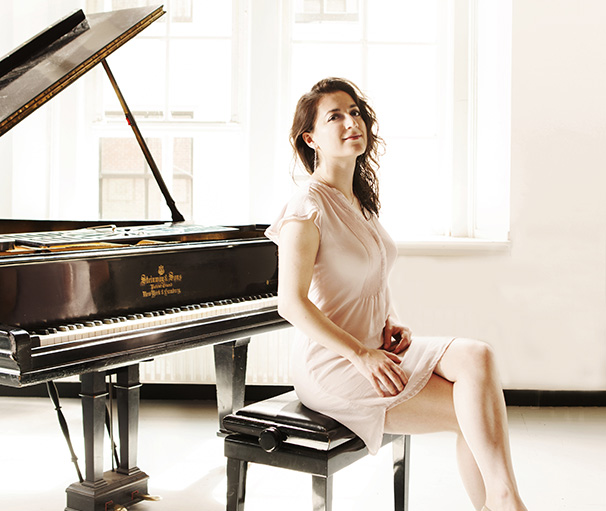 Asked about Brahms' First Piano Concerto, which she will perform with the Yale Philharmonia on Thursday, Nov. 15, Sophiko Simsive '18MM '19MMA does not get into musical details. "I've been trying to think in a more abstract way," she said, explaining, "I like to relate to pieces on a personal level." Simsive described herself as "a musician that always tries to identify the emotion in a piece" and wants the audience to feel that though her performance. "I feel very strongly about this piece," she said. "I want to bring out my personality and I'm trying to bring out the story I'm trying to tell with it."

While Simsive has long been familiar with the concerto, it was not until she played a piano arrangement of the orchestra part, for a March 2017 recital here at YSM by Dong Won Lee '18MM, that she started "thinking deep and really getting my hands on" the piece.

Just hours removed from her first rehearsal with the Philharmonia, Simsive said, "I feel very much part of the orchestra." Thursday's concert in Woolsey Hall, she said, will be a high point of her time here at Yale, largely because she will be performing alongside colleagues. "I feel completely like I'm playing at home," she said.

At the first rehearsal, Simsive said a few words to members of the Philharmonia. "I felt so grateful for the opportunity to play with the Yale Philharmonia. I wanted to let them know that for me it felt like playing chamber music with each and every one of them." Simsive has worked with many musicians in the YSM community and pointed out that she played piano, celeste, and organ as a member of the Philharmonia in September.

As the soloist on Thursday's concert, Simsive is looking forward to sharing a bit of herself with the Woolsey Hall audience. "I can tell a lot of different stories," she said, "but they have to feel something—and that something is my life at Yale."