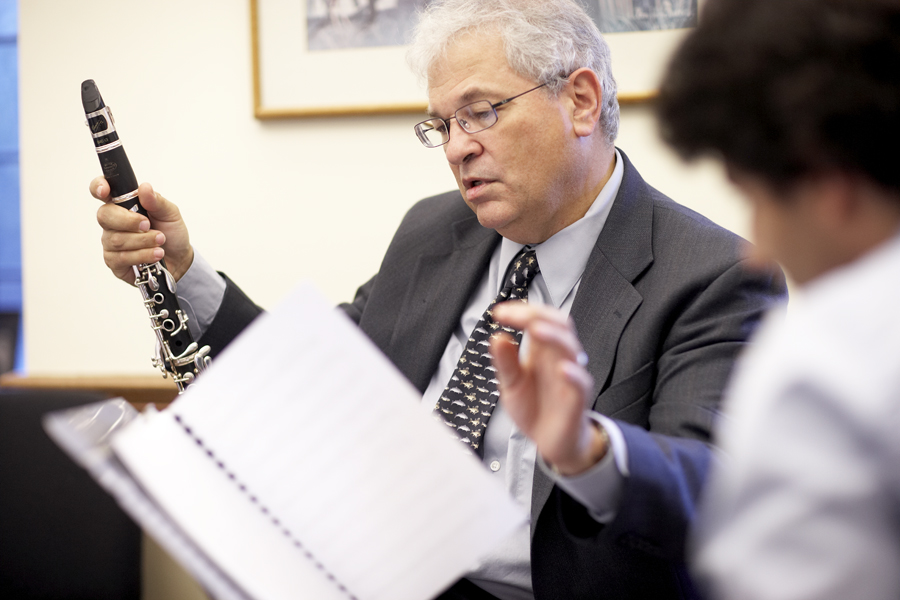 It's been 235 years since Mozart composed his Adagio in B-flat major for two clarinets and three basset horns. That is, clarinet ensembles have been a thing for centuries. In the mid-20th century, concertgoers in the United States heard performances by large clarinet choirs. YSM faculty clarinetist David Shifrin has organized a pair of concerts geared toward introducing today's audiences to that tradition. Since Mozart wrote his Adagio, Steve Reich, Peter Schickele, and Jeff Scott have written for clarinet ensemble. Works by other composers have been so arranged.

The second concert in this season's Yale in New York series, Shifrin said, will trace "the tradition of the sound of clarinet ensembles," calling on current YSM students, alumni, and undergraduates from Yale College. The program, which includes music by the above-mentioned composers and others, will put on display the "versatility of the instrument as well as the homogeneity of sound." Nearly two-dozen clarinetists will participate, along with two percussionists who will perform on Scott's Expeditionary Airmen (Three Day Pass) and arrangements of Benny Goodman's versions of tunes by Eubie Blake and Henry Lodge. An arrangement of Bach's Toccata and Fugue in D minor, Shifrin said, will present concertgoers with "a living, breathing version of an organ," with each stop played by a human and featuring the full range of clarinets, from the contrabass clarinet—which Shifrin described as the "size of a small vehicle"—to the piccolo clarinet.

By design, the program will show off the range of colors and styles that attracted Shifrin and other musicians to the instrument. It will also show off the musicians who have passed through Shifrin's YSM studio and those who are currently studying at Yale. "To have this level of virtuosity, clarinetists coming together to play in an ensemble, is a rare type of event," he said.

YSM faculty clarinetist David Shifrin will present Music for Clarinets as part of the School's Yale in New York series, with a free preview concert at Yale on Thursday, Feb. 14, and a performance in Weill Recital Hall at Carnegie Hall on Friday, Feb. 15.