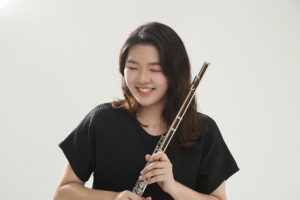 On April 26, flutist and Woolsey Hall Concerto Competition winner Jungah Yoon ’19MM will perform Carl Reinecke’s Flute Concerto in D Major, Op. 283, with Principal Conductor Peter Oundjian and the Yale Philharmonia. We spoke with Yoon about the challenges and rewards of performing such an important part of the flute repertoire.

Q: Why did you choose the Reinecke Flute Concerto as your competition piece?

A: The Reinecke Flute Concerto is unique in being the only flute concerto of the Romantic era, and many audience members will get to experience it for the first time. I feel a strong connection to this piece and believe that many aspects of it relate to my own life and personal experiences. When I perform this piece, I hope to share my story. I chose this piece especially because of the second movement, which is extremely nostalgic and heart-wrenching. Throughout the concerto, there are many passages of dialogue between the different voices—for example, between the solo flute, trumpet, and clarinet in the first movement, and a wonderful cantilena with the cello in the slow movement (or with the timpani, which features the same rhythm as the cello’s pizzicato passages). This rhythm sounds like a beating heart, or perhaps recalls a funeral march. The work encompasses a wide expressive scope, and it is an outstanding piece for the flute.

Q: Reinecke was a contemporary of Brahms and conducted several premieres of Brahms’ works. Do you hear the influence of this relationship in Reinecke’s Flute Concerto?

A: The Flute Concerto was written in 1908, and a key element to understanding the music is to consider its Romantic idiom, an old-fashioned style for its day. The work is rooted in the early 19th century language of Mendelssohn and Schumann, with whom Reinecke studied after settling in Leipzig in 1843, in stark contrast to the style and texture of some exemplary works composed during the same period—for example, Stravinsky’s Firebird (1910) and Petrushka (1911) ballets. Reinecke’s concerto shows him at his best and provides a milder taste of the early 20th century.

The work is in three movements, all rather different in character. The opening Allegro molto moderato is the most symphonic of the three and reflects the influence of Brahms. The first measures seem to emerge and join in on an already existing thought. The slow movement, Lento e mesto (“slow and sad”), is in the style of a bel canto aria, recalling Bellini, or the young Donizetti. The orchestra recedes to an accompanimental role, clearly giving front stage to the flute-as-protagonist, who sings mournfully in B minor. The finale is more upbeat than its Moderato marking might suggest. Reinecke’s keyboard influences are apparent in the overall texture, in which melody and accompaniment are clearly delineated yet rhythmically and gesturally interwoven.

Q: What have been the challenges of preparing and performing this concerto?

A: Personally, the most important aspect of my preparation is feeling that I truly know the work inside and out. Although the process is different for every performance of it, and new challenges arise, I always try to place focus on shaping the various lines, feeling comfortable with the technical elements, and, above all, sharing an expressive story with the audience.

The Romantic language of the Reinecke Flute Concerto has a lot to offer in terms of the expressive writing in the strings and the many colors in the winds and brass. The most challenging aspect of performing this piece is to project above and amid these textures, not just in the literal sense of projecting into the concert hall, but also the deeper manner of projecting my story and emotions to the audience. In this spirit, I hope to connect with the audience in a meaningful way.

Q: In what ways does your mindset change when you’re a soloist?

A: I have come to think about my sound more than I used to in the past. Playing with a big ensemble means that I have to project through the texture even in the softest dynamics, and that my sound needs to be clean and focused. Therefore, it requires a lot more energy compared to when I am playing solo, and I need to be aware of the balance and interaction as a soloist with the many textures and instruments of the orchestra.

Q: What are your thoughts on working with Principal Conductor Peter Oundjian, and on performing as a soloist with an orchestra of your peers?

A: I had the experience of working with Maestro Oundjian earlier this year, when we performed selections from Prokofiev’s Romeo and Juliet, as well as Shostakovich’s Symphony No. 11, for which I was principal flute. I was inspired by his expressive approach and flexibility, always engaging the orchestra to actively listen better. His passion carries through to the vibe of the orchestra and encourages us all to keep an open mind to music-making. I feel grateful for the opportunity to work with Maestro Oundjian again, and to play with the Yale Philharmonia. This experience is so meaningful to me, especially since it is my first time playing as a soloist with an orchestra. I am so happy to share the stage with my wonderful colleagues and beautiful musicians, who are so supportive and always give me positive energy. Coming to Yale was my first time studying abroad, and this enriching community of peers made me feel comfortable and at home. I look forward to playing with them and am excited for the concert!