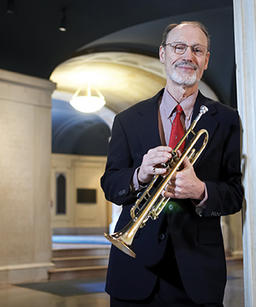 In 2019, trumpeter Allan Dean retired from his position as Professor in the Practice of Trumpet at the Yale School of Music after 31 years on the faculty. He is still actively performing with the Berkshire Bach Society.

Dean performs and teaches each summer at the Norfolk Chamber Music Festival in Norfolk, Connecticut. He is a frequent soloist with Keith Brion’s New Sousa Band. Dean has also appeared at the Speleto and Casals Festivals, the Banff Centre (Canada), the Orford Arts Centre (Canada), Musiki Blekinge (Sweden), the Curitiba Music Festival (Brazil), and the Morella Festival (Spain). He can be heard playing both modern trumpet and early brass on over 80 recordings on most major labels including RCA, Columbia, Nonesuch, Summit, and others. On early instruments he has recorded with Calliope, The New York Cornets and Sacbuts, The Waverly Consort, The Ensemble for Early Music, and The Smithsonian Chamber Players.

Dean previously served on the faculties of Indiana University, the Manhattan School of Music, the Hartt School, the Eastman School, and the Mendez Brass Institute.

Dean lives in the Berkshire Mountains of Western Massachusetts with his wife, Julie Shapiro, an artist, and his daughter, Eloisa, a writer. He is an avid tennis player and practices hatha yoga daily.