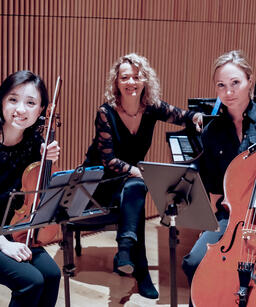 The MAMMOTH TRIO formed for a performance of Martin Bresnick’s masterpiece Trio (1992) at the MoMath Museum of Mathematics in New York City. Its origins began in 2010, as the dynamic commissioning cello and piano duo TwoSense – the “new music equivalent of a special ops team” (New York Magazine). Both Bang on a Can All-Stars alumni, cellist Ashley Bathgate and pianist Lisa Moore commissioned fifteen new works for TwoSense. They began collaborating with the virtuoso violinist Elly Toyoda in 2016. In early 2020, the trio were featured in the debut of  Tales of Hopper with the Cherylyn Lavagnino Dance Company at the DiMenna Centre in NYC – a live music and dance representation of Edward Hopper’s paintings. Most recently “The Mammoths” have recorded David Lang’s score shade, written for the NYC Ballet. The trio shares a daring passion for exploring new music while enjoying independent solo and chamber music careers – performing and recording diverse repertoire in a range of settings.

A native of Osaka, Japan, violinist ELLY TOYODA (NCMF '15) has performed in major festivals throughout Asia, Europe, and North America. She has been a featured soloist in a program of baroque concertos performed by Rutgers faculty, and has performed standard repertory through solo and chamber recitals at the Château Fontainebleau in France, the Oratorio dei Disciplinanti in Italy, and Japan's Symphony Hall and Ishikawa Ongakudo among others.

An avid supporter of contemporary music, Toyoda was awarded the Prix de Musique Contemporaine by the Fontainebleau Schools, has appeared on programs at the National Sawdust, Le Poisson Rouge, and the Elb Philharmonie in Germany, and has premiered numerous works through the Norfolk Chamber Music Festival, Lucerne Festival,  Massachusetts International Festival of the Arts, and Talis Festival. Toyoda is also a frequent collaborator with Eighth Blackbird, the 4-time Grammy award-winning contemporary music ensemble.

Toyoda currently serves as Visiting Assistant Professor of Violin at the Sunderman Conservatory of Music at Gettysburg College and part-time Lecturer teaching Performance Practice at Rutgers University. She has previously served on the faculties of SpeakMusic Conservatory and Lindeblad School of Music. Toyoda served as a secondary violin instructor at Oberlin and Yale, and was a guest artist at the University of Oklahoma.

American cellist ASHLEY BATHGATE  has been described as an “eloquent new music interpreter” (New York Times) and who combines “bittersweet lyricism along with ferocious chops” (New York Magazine). The desire to create a dynamic energy exchange with her audience and build upon the ensuing chemistry is a pillar of Bathgate's philosophy as a performer.

Bathgate was a member of the acclaimed sextet Bang on a Can All-Stars for ten years. She is a member of the chamber music group HOWL, TwoSense with pianist Lisa Moore, and Bonjour, a low-strung, percussive quintet. Bathgate is also a part of the Mammoth Trio–with pianist Lisa Moore and violinist Elly Toyda–wich makes their Norfolk debut this summer.

Among her recordings are her debut solo album, Stories for Ocean Shells (2016), featuring a set of works for cello composed by Lisa Moore. Bathgate also commissioned the ‘composer collective’ Sleeping Giant to write ASH, a six-movement suite for solo cello on released on New Amsterdam Records (2019). Her forthcoming album, 8 Track, featuring new multitrack works by Alex Weiser and Emily Cooley, as well as a new rendition of Steve Reich’s Cello Counterpoint, is due this season on New Focus Recordings.

​Bathgate’s radio/television appearances include performances on BBC Radio 3,WQXR’s Meet the Composer podcast, NPR’s Performance Today, Late Night and The Tonight Show with Jimmy Fallon among others. She has also recorded for several podcasts presented by Wondery, Gimlet and Stitcher.

​Bathgate studied at Bard College with Luis Garcia-Renart before continuing her education at Yale University with renowned cellist Aldo Parisot. Originally from Saratoga Springs, NY, Bathgate began her cello studies with the late Rudolf Doblin, principal cellist and assistant music director of the Buffalo Philharmonic in the 1950’s. After his passing, she resumed her tutelage with Ann Alton at Skidmore College. Bathgate resides in Saratoga Springs, NY.

Australian pianist LISA MOORE, described by The New York Times as “brilliant and searching” and by The New Yorker as “New York’s queen of avant-garde piano,” has collaborated with a large and diverse range of musicians and artists, from classical orchestras and ballets to new music ensembles. From 1992 to 2008, she was the founding pianist for the Bang On A Can All-Stars. Over her 40 year career she has collaborated with more than 200 composers – from Iannis Xenakis, Elliot Carter, and Philip Glass to Martin Bresnick, David Lang, and Julia Wolfe –  and has performed in many of the world's great concert halls including the Royal Albert Hall, La Scala, Carnegie Hall, Musikverein, and the Sydney Opera House. Moore has released ten solo CDs and more than 30 ensemble CDs on a variety of labels to much acclaim. As an artistic curator she designed Australia’s Canberra International Music Festival Sounds Alive ’08 series.

Since 1997, Moore has spent a week each summer coaching at the Norfolk Chamber Music Festival—Yale Summer School of Music's the New Music Workshop. She is also a regular guest at the Australian National Academy of Music in Melbourne.  Born in Australia, Lisa grew up in Canberra, London, and Sydney, starting piano lessons at age 6. Her formal studies continued at the Sydney Conservatorium, University of Illinois, Eastman School of Music, SUNY Stonybrook, and in Paris for a year with Yvonne Loriod.  Lisa Moore is a Steinway Artist.