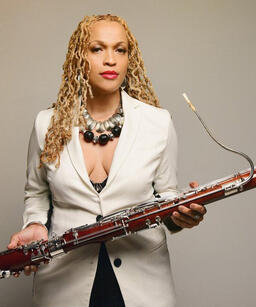 Bassoonist Monica Ellis is a founding member of the twice Grammy nominated wind quintet, Imani Winds, who in their 25th season, continues to dazzle audiences with their dynamic playing, adventurous programming and commitment to outreach, new works and collaborations.

A self-proclaimed “band kid”, growing up in her beloved city of Pittsburgh, Monica played clarinet, saxophone and piano. After being introduced to the bassoon in middle school, she began studying with Mark Pancerev, of the Pittsburgh Symphony and went on to receive her Bachelor of Music degree from Oberlin College Conservatory of Music, studying with George Sakakeeny. While at Oberlin, her desire to connect with others flourished through her participation in the Panama Project – a month long camp for young Panamanian musicians. She received her Master of Music degree from The Juilliard School and Professional Studies Certificate from Manhattan School of Music in the Orchestral Performance Program, studying with Frank Morelli at both institutions.

A passionate teacher, she is on the faculty of Curtis Institute of Music and Manhattan School of Music and has been a visiting professor/faculty at The University of Chicago, Mannes School of Music and The Juilliard School's Music Advancement Program. Also, a renowned clinician, she has given master classes and solo recital performances across the country.

She is a frequent commentator on critical issues of race, gender and entrepreneurship in classical music and serves on the advisory boards for Orchestra of St. Luke’s Education Committee, Meg Quigley Vivaldi Competition & Symposium for Women Bassoonists of the Americas, and is a board member of Concert Artists Guild and the International Double Reed Society.

Monica religiously watches Jeopardy!, loves home decorating and resides in the historic village of Harlem in New York City with the greatest joy of her life - her 8 year old son, Oden.