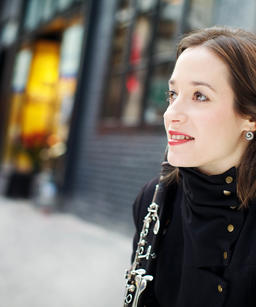 Praised as “extraordinary” and “a formidable clarinetist” by The New York Times, Romie de Guise-Langlois has appeared as soloist and chamber musician on major concert stages throughout the U.S., Canada, Europe, and Asia. A featured musician at many festivals, she was also a winner of the Astral Artists’ National Auditions in 2011 and a First Prize winner of the Houston Symphony’s Ima Hogg Competition.

A native of Montreal, de Guise-Langlois earned degrees from McGill University and the Yale School of Music, where she studied under David Shifrin. She is an alumnus of Ensemble Connect and The Bowers Program, and is currently Assistant Professor of Clarinet at the University of Massachusetts at Amherst. Previously, de Guise-Langlois served on the faculty of Montclair State University.