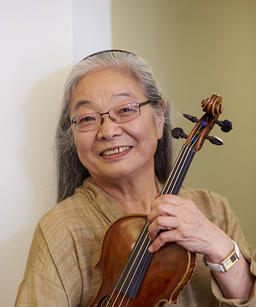 My teaching is individually designed to my students’ needs and aspirations, and to make them become their own best teacher.

My teaching is individually designed to my students’ needs and aspirations, and to make them become their own best teacher.

Described by The New York Times as a performer of “exquisite thoughtfulness” and a “breathtakingly adept violinist,” Syoko Aki studied at the Toho Academy of Music in Tokyo, Japan. She came to the United States from Japan in 1962 and studied under Broadus Erle at the Yale School of Music, where she was later appointed to the faculty. Aki retired from the School of Music faculty in 2022.

In 1968, Aki became a member of the Yale String Quartet, which earned international praise for its performances and recordings. She now teaches a studio of graduate and undergraduate violin students. For years, Aki collaborated with Professor Emerita Joan Panetti, with whom she gave a complete performance, over two seasons, of Mozart’s violin sonatas as part of Yale’s celebration of the 250th anniversary of the composer’s birth. Aki is the concertmaster, soloist, and founding member of the Saito Kinen Orchestra and Mito Chamber Orchestra in Mito, Japan, and of the New York Chamber Symphony in New York City.

An active performer of contemporary music, in Aki was the soloist in 2010 in two performances of Penderecki’s “Capriccio for Violin and Orchestra” with the composer conducting the Yale Philharmonia at Woolsey Hall in New Haven and at Carnegie Hall in New York City. She appears regularly at the Yale Summer School of Music/Norfolk Chamber Music Festival.