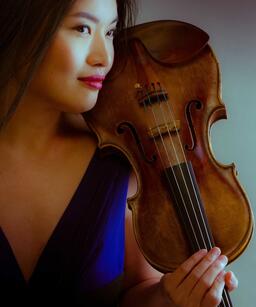 Praised by the Seattle Times as “Simply marvelous” and Taiwan’s Liberty Times for “astonishingly capturing the spirit of the music,” violinist Tien-Hsin Cindy Wu enjoys a versatile career as a soloist, chamber musician, and educator throughout North and South America, Europe and Asia.

Cindy is a recipient of many awards including the Milka Violin Artist Prize from the Curtis Institute of Music, and third prize at the International Violin Competition of David Oistrakh. She taught violin, chamber music, and string pedagogy at the Thornton School of Music of the University of Southern California, coached chamber music at the Encore School for Strings and Hotchkiss Summer Portals, and is currently on faculty at the Curtis Institute of Music’s Young Artist Summer Program and Alumni Mentorship Network. Passionate about programming, Cindy is the Music Director of New Asia Chamber Music Society, Director of Chamber Music at the Hidden Valley Music Seminars, program creator of Sunkiss’d Mozart, and she has curated programs for the Da Camera Society in Los Angeles as the Artistic Partner and Artist in Residence.

Outside of the classical style, Cindy also explores collaborations with artists of other genres and innovative visions. Some of which include album, “Bach in Los Angeles” with German electric bassist Jacques Bono, performance with contemporary American musicians Jeremy Kittel and singer Aoife O’Donovan, and multiple recording projects for Spanish film composer Arturo Cardelús.