The Argus Quartet, the ensemble that served from 2015 to 2017 as YSM’s fellowship quartet-in-residence, and pianist Dominic Cheli ’16MM, have been named joint first-prize winners of the annual Concert Artists Guild Victor Elmaleh Competition. The quartet and Cheli will each receive a $5,000 cash prize and a management contract and will be presented in recital at Weill Recital Hall at Carnegie Hall, in addition to other opportunities.

The Argus Quartet, which was founded in Los Angeles in 2013, was named the first-place winner in the Senior Strings division of the University of Michigan’s M-Prize Chamber Arts Competition in May, which earned the group a $20,000 cash award and a residency at the University of Michigan School of Music, Theatre & Dance during the 2017-2018 academic year. At YSM, the Argus Quartet was the first ensemble to be mentored by the School’s ensemble-in-residence, the Brentano String Quartet. The Argus Quartet is currently the graduate quartet-in-residence at The Juilliard School.

Cheli, who studied at the Yale School of Music under the tutelage of pianist Peter Frankl, has performed at such venues as Carnegie Hall, Le Poisson Rouge, and Sheldon Concert Hall in his hometown, St. Louis. He is currently an artist diploma candidate at the Colburn Conservatory of Music, where he studies with Fabio Bidini. Cheli recently recorded a CD of music by Muzio Clementi at the Yale School of Music for an album that was released on the Naxos label.

The School of Music is now accepting applications for enrollment in fall 2018. “We have openings in all areas, including the tuba and harpsichord studios and the orchestral conducting program,” Donna Yoo, YSM’s director of admissions and alumni affairs, said. “It is unusual for us to have available spaces across all programs, and we are looking forward to welcoming new students to all areas of study.”

The Admissions Office anticipates interest in the School’s revamped B.A./M.M. program, which is now open to applications from high-school seniors. The program, Yoo said, “should appeal to students who are interested in pursuing both academic and musical excellence at an Ivy League institution.”

The School will announce available fellowship opportunities in December. These would include openings in the string quartet fellowship program and the recently launched collaborative piano program. Applications for the Morse Postgraduate Teaching Artist Fellowship will also be accepted starting in December.

The Rolston String Quartet ’16Norfolk has been named the new fellowship quartet-in-residence at the Yale School of Music. The group, whose previous residencies include the Yale Summer School of Music/Norfolk Chamber Music Festival in the summer of 2016, will begin their tenure at YSM this fall. While at Yale, the quartet will work closely with the Brentano String Quartet — YSM’s quartet-in-residence — perform recitals, and participate in education-outreach programs.

“The Rolston String Quartet is very eager to come to New Haven as the Yale School of Music’s fellowship quartet-in-residence,” the group said in a statement. “We are incredibly optimistic about the possibilities for development and growth provided by Yale’s stimulating environment. We can’t wait to meet the Yale students and faculty who will illuminate and influence this new experience. Working closely with the Brentano Quartet is a dream come true. They are endlessly generous and inspiring people whose artistic spirits are to be admired. We look forward to deepening our musical understandings, refining our interpretations, and benefiting from their extensive professional experience.

“We will be so lucky to be able to coach chamber ensembles made up of Yale (undergraduate) students; this opportunity is a rare one that will yield immense insight into the complexities of teaching music. The fellowship program at Yale will aid our growth as we cultivate an ensemble that reflects the values of community, the highest levels of artistic and academic excellence, and the important traditions of chamber music,” the group said.

END_OF_DOCUMENT_TOKEN_TO_BE_REPLACED

The Argus Quartet, YSM’s fellowship quartet-in-residence, has been named the first place winner in the Senior Strings division of the University of Michigan’s M-Prize Chamber Arts Competition. In addition to a cash prize of $20,000, the quartet will return to the University of Michigan School of Music, Theatre & Dance for a residency during the 2017-18 academic year.

Now in its second year, the M-Prize seeks “to identify and showcase the highest caliber of international chamber arts ensembles,” according to the competition’s website. In addition to distributing more than $200,000 of cash prizes (an increase from last year) the M-Prize provides competition winners with platforms for professional development and performance opportunities.

This year, 29 applicants were selected to compete as semifinalists for the grand prize in Michigan. The ensembles, which are made up of 112 artists from seven countries, were selected from an pool of more than 100 ensembles representing 41 countries. In addition to increased prize coffers, this year’s competition featured an interview round during which each of the senior division winners (strings, winds, and other) were asked to advocate on behalf of their ensemble’s repertoire and program plan.

Having been praised by the Calgary Herald for its “supreme melodic control and total authority,” the Argus Quartet is quickly gaining a reputation as one of today’s most dynamic and versatile young ensembles.

END_OF_DOCUMENT_TOKEN_TO_BE_REPLACED

The Argus Quartet, the Yale School of Music’s fellowship quartet-in-residence, has welcomed a new member, violist Dana Kelley, to the ensemble. “Dana is a truly dynamic performer with an inquisitive spirit, and we are deeply impressed by her musicianship and her personality,” the quartet said in a statement. “We are growing to admire her more and more every day, and it’s already clear that she’s going to put a major imprint on our quartet’s artistic voice and vision. We look forward to many years of working together, and we can’t wait to share her music-making with audiences at Yale and beyond.” Kelley joins violinists Clara Kim and Jason Issokson and cellist Joann Whang ’09MM in the quartet. END_OF_DOCUMENT_TOKEN_TO_BE_REPLACED

The Argus Quartet, current fellowship quartet-in-residence at the Yale School of Music, will perform at Carnegie Hall’s Zankel Hall on April 15. The concert is part of the Kronos Quartet’s weeklong workshop for young professional string quartets to explore new works. These works are commissioned as part of Fifty for the Future: The Kronos Learning Repertoire, a major commissioning initiative devoted to the most contemporary approaches to the string quartet. The workshop culminates in the Zankel Hall performance, which also features selections from one of Kronos’ signature works, Terry Riley’s Salome Dances for Peace.

In addition to the Riley, the concert includes music by Fodé Lassana Diabaté, Garth Knox, and Wu Man, and the Friction and Ligeti Quartets will also perform.

(Buy one ticket and get the second one free with code KRO23736*. Doors open one hour early, and the first 200 concertgoers receive a voucher for a free drink.)

END_OF_DOCUMENT_TOKEN_TO_BE_REPLACED

The next event in the Music Talks at the Whitney series will take place Thursday, Dec. 10 at 4 pm. Presented by the Yale School of Music and Whitney Humanities Center, the event will feature a performance of Bela Bartók‘s String Quartet No. 4 and a post-performance discussion.

The work will be performed by YSM’s fellowship quartet-in-residence, the Argus Quartet: Jason Issokson, Clara Kim, violins; Diana Wade, viola; and Joann Whang, cello. Michael Friedmann, a member of the faculty of both the School of Music and the Department of Music, will introduce the piece. END_OF_DOCUMENT_TOKEN_TO_BE_REPLACED

The Argus Quartet has been appointed the new fellowship quartet-in-residence at the Yale School of Music. Beginning in the fall of 2015, they will be mentored by the Brentano Quartet, performing frequently and receiving career guidance. The ensemble will also assist the Brentano Quartet in leading performance classes and will coach undergraduate chamber music.

The String Quartet Fellowship offers an exceptional young quartet the opportunity to work closely with the Brentano String Quartet in an exciting new residency program at YSM. We are accepting applications for fall 2015.

Alumni of the quartet fellowship program include the Jasper String Quartet, the winners of the 2012 Cleveland Quartet Award. END_OF_DOCUMENT_TOKEN_TO_BE_REPLACED 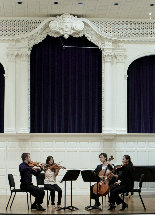 The Yale School of Music will present the next Lunchtime Chamber Music concerts of the year on April 17 and May 8, 2013. Both concerts take place on Wednesdays at 12:30 pm.

The midday concerts in this series feature a variety of chamber ensembles, each composed of musicians undertaking graduate study at the Yale School of Music. Faculty violinist Wendy Sharp is the director of the School’s chamber music program.

Lunchtime Chamber Music concerts are free and open to the public; no tickets are required. The concerts take place in Morse Recital Hall, located in Sprague Hall at 470 College St., New Haven. END_OF_DOCUMENT_TOKEN_TO_BE_REPLACED