This is the last in a series of three guest posts by Michael Compitello '11MMA, a member of the Yale Percussion Group.
Part I
Part II

Playing the so-called laws of nature 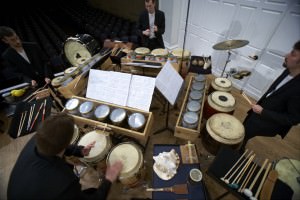 During the spring semester and into the summer, we in the Yale Percussion Group have been working with David Lang, one of the founders of Bang on Can and a faculty member at the Yale School of Music, on a new interpretation of his seminal percussion quartet, the so-called laws of nature. Come and join us at 7:30 pm June 22nd at Galapagos Art Space in Dumbo, Brooklyn!

Playing the so-called laws of nature is an unforgettable but unforgiving experience. Since what we and feel when we play is so personal, I can only offer my own experiences. For an excellent discussion of performance issues in the second part, check out So Percussion’s video on the website of drumstick manufacturer Vic Firth.)

One of the most difficult aspects of performing the so-called laws is a large factor in what makes the piece so compelling: the physical, almost theatrical setup of the quartet on the stage. Rather than positioning ourselves in an arc or semi-circle, David asks that the quartet present each movement in a line. In the first and third parts, we stand facing the audience, while in the second part, the group stands in profile, accentuating the visual and musical canon. Although this arrangement presents us — as David asks — as “four soloists playing (almost) the same virtuosic solo at (almost) the same time,” the loss of sight lines and the added distance complicate our efforts to play together. This is especially true in the second part, when each player is progressively displaced by one eighth note. When I played this movement, I memorized the composite rhythm — the simultaneous rhythm of all four parts — as a way to help me keep my place, using the staggered entrances of the different pipes and certain melodic fragments as way-points in lieu of normal visual cues.

The first part of the so-called laws requires the same type of adjustments as the second. At the same time, the first part’s almost constant stream of notes adds other difficulties. Although the swooning dynamics and accelerating–decelerating rhythm at the opening of the movement make the music feel almost improvised, the first movement is rigorously disciplined in pitch and rhythm. One of the byproducts of this discipline is that the music is subsumed with patterns. At least, you think it is. 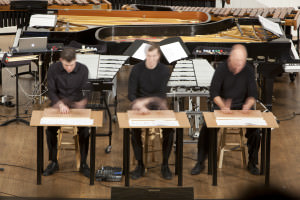 While the patterns in the second and third parts are clearly audible, the first part’s wooden music is more elusive. When we asked David about how he composed the first movement, in the hopes that it would help us learn it faster, he said, “It won’t help you.” There are clear large-scale processes underway. There’s a varied repeat of the first three pages, followed by a contrasting section that gradually transforms into a kind of coda that combines the previously heard material. There are recognizable larger chunks of material: I notice that I’m gradually not playing the lowest slat, etc.

But the note-to-note progressions don’t appear to be controlled in a way that I can detect while playing. What this means is that I’m constantly being confused by pattern jet-trails, the echoes of the larger processes that make up the music, but don’t necessarily govern every single pitch. I’ll see a grouping of three notes and think, “That’s the same as what happened a page earlier,” then be disappointed when I miss the next note. The so-called laws requires constant focus and quick recovery from mistakes!

The third part sounds like the simplest thing in the world: it’s one of the most achingly beautiful percussion pieces I know. The droning flowerpots provide a predictable harmonic progression over which the teacups, bells and woodblocks gracefully intertwine. David makes his patterns extremely audible—slowing and reducing the number of musical changes while thinning the texture dramatically—and uses an extremely soft and delicate instrumentation to provide a sense of fragility. The total unison focuses the ear on the tiny details that separate our instruments: the differences between our teacups, the nuances of each player’s bell sounds, the small bumps in the flower pots’ humming foundation. Under the surface, however, we’re paddling like frantic ducks. This movement is physically demanding, and since we’re playing in complete unison, any mistake or miscalculation is felt instantly, both as an audible crackle and as a ripple of stress from our demeanor. We practiced individually, training our brains and hands like marathon runners, then used our time as a group to weed out inaccuracies and work on phrasing and pacing.

I hope that you can come and join us for the so-called laws of nature and Steve Reich’s Music for Pieces of Wood on June 22nd at Galapagos. We’ve had an amazing experience with these pieces, and can’t wait to share them with you. Hope to see you there!