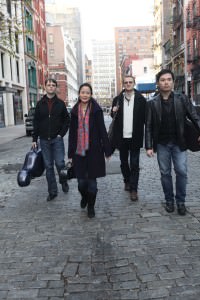 The Chamber Music Society of Lincoln Center announced today the appointment of two outstanding young ensembles, the Amphion String Quartet and the Danish String Quartet, to its prestigious CMS Two program. The three-year residency will begin with the 2013–2014 season.

Three of the four members of the Amphion Quartet are alumni of the Yale School of Music: cellist Mihai Marica ('04 CERT, '08 AD) and violinists Katie Hyun ('09 AD) and David Southorn ('09 MM, '10 AD). The quartet's violist is Wei-Yang Andy Lin.

In its announcement, CMS Two noted that both quartets were "chosen from an international pool of applicants by a distinguished panel of performers, educators, and artistic administrators" and and that "each is an award-winning ensemble with exceptional musical training."

The depth of involvement reflects the commitment of CMS, under the leadership of artistic directors David Finckel and Wu Han, to foster an intergenerational roster of talent.

The Amphion String Quartet – violinists Katie Hyun and David Southorn, violist Wei-Yang Andy Lin, and cellist Mihai Marica – first performed together at Sprague Hall at the Yale School of Music in February 2009. The overwhelmingly positive audience reception at this concert was the inspiration behind their mutual desire to pursue a career as the Amphion String Quartet.

Hailed for its “gripping intensity” and “suspenseful and virtuoso playing” by the San Francisco Classical Voice, the Amphion String Quartet was awarded first prize in the piano and strings category as well as the Audience Choice Award at the 2010 Plowman Chamber Music Competition. It also received first prize at the Hugo Kauder String Quartet Competition. Recently, the quartet has made appearances at the Beinecke Library at Yale University, the WMP Strad for Lunch Series in New York, and the Chelsea Art Museum.

The Amphion String Quartet has performed at the Mostly Music Festival with such renowned artists as Ani Kavafian, Carter Brey, and Ettore Causa. In the summer of 2010 the quartet was invited to the Beethoven Institute at Mannes College, where it worked closely with the Brentano Quartet, and to the Music@Menlo International Program in California. This past summer the quartet enjoyed an intense performance schedule at the OK Mozart Festival; as the Protégé Quartet-in-Residence at Chamber Music Northwest, it had the opportunity to collaborate with clarinetist David Shifrin.

In addition to their passion for performing, each member of the Amphion String Quartet has an affinity for educational opportunities. While at Chamber Music Northwest the quartet had numerous opportunities to coach students, from elementary to high school age, through master classes, performances, and private coaching sessions.

Highlights of the 2011-2012 season include an appearance at the Schneider Concert Series in New York City, a world premiere of a string quartet by John Sichel in New Jersey, and performances at the Metropolitan Museum of Art and the Tertulia Chamber Music series.