In the Deep South, in an Alabama town where the civil rights movement erupted and endured, disadvantaged children are being given hope and help, one stringed instrument at a time.

For 10-year-old Heaven Thrasher, both arrived in the form of a brand new cello, a contraption she knew nothing about. 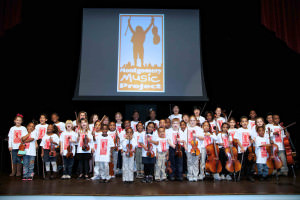 But when the Montgomery Music Project came to her elementary school, Heaven was mesmerized by the the sweet, deep sounds emanating from an instrument nearly as tall as her.

"She just fell in love with it," says her mother, Michelle, a disabled single mom who struggles to raise four children.

"We have very little income," Thrasher said, and she knew she couldn't afford music lessons.

But the beauty of the Montgomery Music Project, which is preparing for its third school year beginning this fall, is that nearly all of its students receive full scholarships. And they get their very own instruments. And they are taught by professional musicians.

Asked what she adores about the cello, Heaven replies with a child's clarity:

"It's big," she says. "And I like the teachers." A country music fan, the girl said she knew nothing about classical music.

Now her favorite song is "Ode to Joy" and she really likes composer Ludwig van Beethoven, who included it in his Ninth Symphony in 1824.

At first she thought she would play the fiddle. But she opted for the cello, she said, because "you don't have to stand up. And it has a beautiful sound."

The project is the brainchild of Laura Usiskin, a cellist who moved from Connecticut to Montgomery to take a fellowship with city's symphony orchestra in 2010.  After facing the requisite culture shock, she was even more surprised to find there were no opportunities for school children to learn to play music.

None of the public schools had instruments. And neither did the private schools. In a state where the Crimson Tide's sports schedule is a blueprint for social life, music in schools is pretty much limited to marching bands, she discovered.

Usiskin says it only took about six months to get folks lined up who could visualize her dream — teaching low-income kids to play the violin or viola or cello. "It wasn't like I was competing against another program, because there wasn't anything else," she said. "People really saw the need."

Under the auspices of the Montgomery Symphony Orchestra, the program received donations and corporate sponsorships to fund Usiskin's vison.

But there weren't a lot of people in the area who could teach children to play stringed instruments. So Usiskin reached out to musicians she knew from such places as Yale University, where she is completing a doctorate's degree in music.

Peter Povey, an effervescent Brit who received his master's music degree from Yale and is currently working on his doctorate at Northwestern University,  came on board to design summer camps for kids who have nothing to do during the brutal summer doldrums in Montgomery. He is also the program's education director — meaning he comes up with fun curriculum that doesn't seem like schoolwork.

First come easy-to-play songs like "Twinkle, Twinkle, Little Star" and "Lightly Row." Then comes the fun stuff — the soaring orchestral backbone of Led Zeppelin's "Kashmir" and the foot-stomping melody of Queen's "We Will Rock You."

"It's a very easy beat to play and the kids love it," says Povey, a violinist whose love of music is infectious. "It sounds like Top 40 or hip hop. Something they hear on the radio. That's where we manage to cross over and show them that this instrument is relevant."

Enrollment doubled from the program's first year to 80 children in the 2012-13 school session. Summer camp begins next month.

Not all of the kids are from needy families. One of the three participating schools is a predominately white private academy.  One is in a poor neighborhood where African-American children are encouraged to join. The other is in a low-to-middle class neighborhood.

In public concerts offered to Montgomery residents, "we might have somebody playing violin in a duet who is the daughter of a teen-age mother playing with the wealthy daughter or son of a lawyer or doctor," Povey says.

And in a city that is still trying to grow from the divisiveness of the Civil Rights era — where Rosa Parks refused to give up her bus seat in 1955, where the Rev.  Martin Luther King Jr. presided over the Dexter Avenue Baptist Church and orchestrated the Montgomery bus boycott, and where thousands marched from Selma in 1965 at the height of equal rights protests — these small bridges between races and classes are very big connections.

"I was lucky, I came from a pretty good family who could pay for private lessons," says Povey, who attended Eton with Prince William. "In a small way, I feel like I'm doing my duty" by working with the project.

In a short two years, "the opportunities these kids have had are just incredible ... and they are learning these nice lessons about discipline and learning to make music, without it being drummed into them," he added.

One of his favorite moments came last year, when the Montogomery Music Project was a guest performer with the city's symphony orchestra during an outdoor concert at the state capital.

Out tromped a bunch of kids to accompany 80 professional grown-ups. Povey could read the minds of the audience from the looks on their faces, he recalled, laughing.

"Small children with stringed instruments. This is going to be terrible."

And then, bows in hand, the children launched into "Kashmir" and all heck broke loose.

"The audience went wild," he said. "It was like the best thing they'd ever seen."

To Usiskin, some of the project's most moving moments occur when she reads scholarship applications submitted by parents.

"It's amazing to see their stories," she says. "Some say 'my daughter's father is incarcerated' or 'my husband left me doesn't pay child support and I have four kids.' I have one mother who is a fulltime student. We ask that everyone pay something because we want them to be invested in the program."

That something can be as little as $15…