At Yale's 313th Commencement Exercises on Monday, May 19, the University awarded honorary degrees to twelve "individuals who have achieved distinction in their fields." Among these awards were two Honorary Doctor of Music degrees, awarded to Joseph Polisi '73MM '75MMA '80DMA, and Ralph Stanley. Mr. Polisi, President of The Juilliard School since 1984, was recognized for his contributions to arts education. Said President Salovey upon presenting the degree:

For thirty years, you have led Juilliard, the world’s leading conservatory for professional training in music, dance, and drama. A compelling advocate for the arts, you are a gifted musician, teacher, and administrator. You have been instrumental in creating community outreach programs, bringing the arts to children in city schools, and working for curriculum reform to embrace the arts. You have used your background in international relations to further musical diplomacy in international settings and to promote the role of the arts in public discourse and experience. You are one of Yale’s own, and we are proud to award this degree of Doctor of Music.

Polisi also received the Samuel Simons Sanford Medal from the Yale School of Music in 2012. On Polisi's selection for the honorary degree, Dean Blocker says:

Joseph Polisi has fashioned The Juilliard School into the world's leading and best known conservatory. His leadership is admired and respected by peers throughout the world, and his gifts as a musician and author reflect his commitment  to the fine and liberal arts. President Polisi is one of the School's most distinguished graduates, and his enduring friendship has enriched the YSM community. 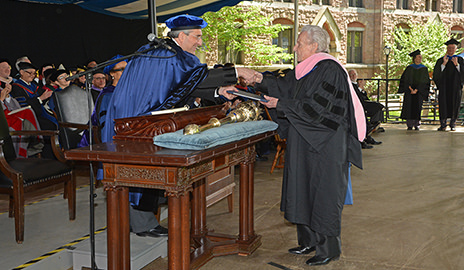 You are the patriarch of traditional mountain and bluegrass music. From the Clinch Mountains of Southwest Virginia to the concert halls of the world, you have taken a distinctly American sound and made it your own. Your music has its roots in the gospel songs of your childhood and the banjo playing you learned from your mother. The “Stanley style” of picking produces a distinctive and characteristic rhythm, and generations of singers have been influenced by your signature voice with its mournful sound and raw, emotional power. You are a living legend, and we sing your praises as we award you this degree: Doctor of Music.

As Stanley received the degree from President Salovey, the Yale Bands played the bluegrass tune "Man of Constant Sorrow," with Prof. Thomas C. Duffy on banjo.