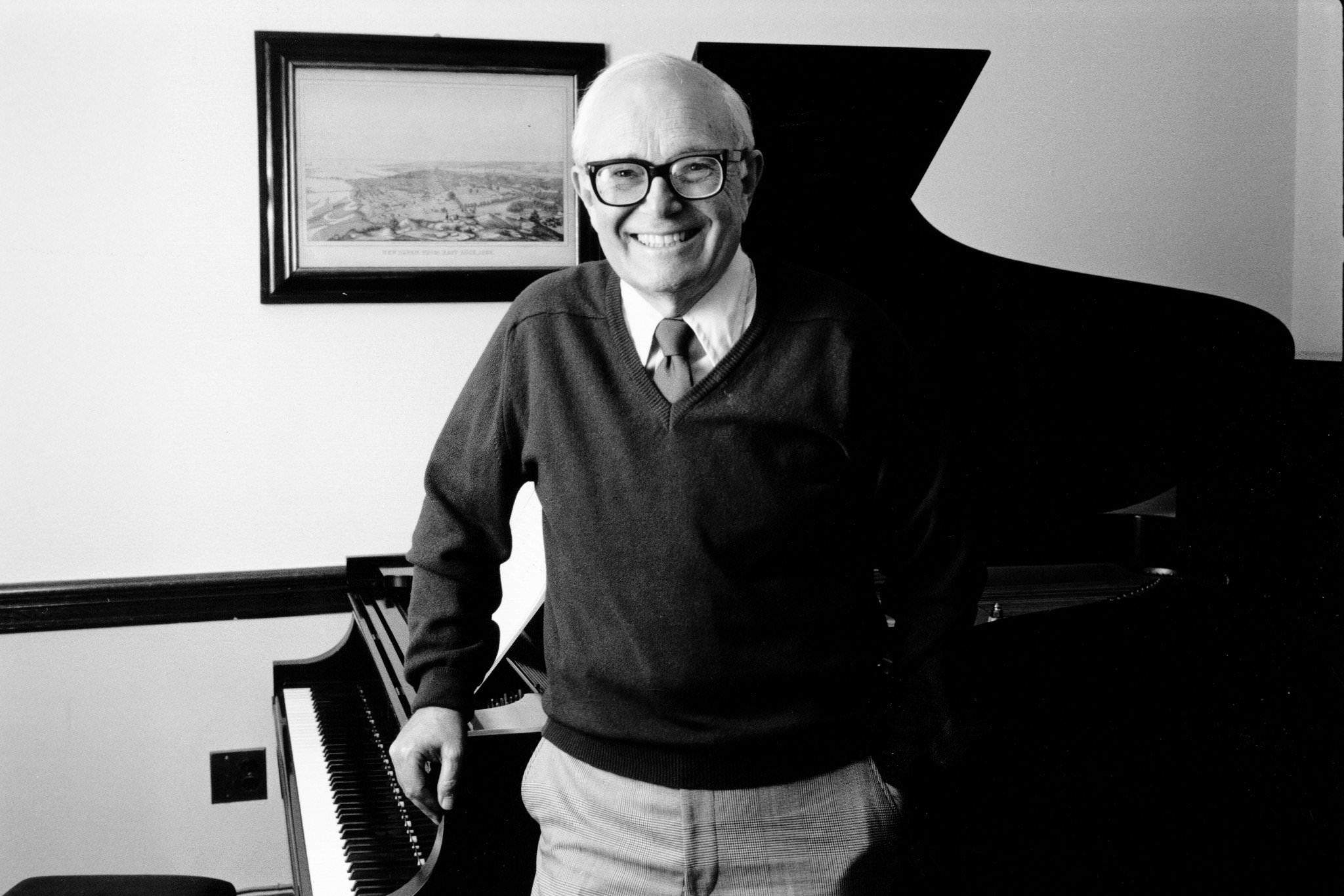 Laderman has been quoted as saying: “When I was very young, everything I wrote was tonal; and after that, atonal; and then serial. Finally, I’ve come back to tonality—but in a synthesized form, with the freedom to call upon all techniques.” A biography by Neil Levin notes: “He was led toward this synthesis in 1975, when he was commissioned to write an organ piece and composed a set of twenty-five preludes in different styles, each using a different technical or procedural approach and/or language: atonal, serial, dodecaphonic, tonal, expressionist, polytonal, modal, etc. When he heard those preludes performed without pause as a single work at the premiere, he realized that he could combine them all in a single, unified work. ‘Why segregate these aesthetic elements?” he later recalled asking himself. He described that realization as nothing short of “traumatic … it changed my life.’”

After joining the Yale School of Music community as a composer-in-residence in 1988, Laderman served as Dean from 1989 to 1995. Under his leadership, the Artist Diploma was added to the School’s degree programs in 1993. After his tenure as Dean, he served as Professor of Music until his retirement in 2013. He was named Professor Emeritus in 2014.

Ezra Laderman was born in Brooklyn, New York, on June 29, 1924. The son of Polish immigrants, he began improvising at the piano at age four and just a few years later began to compose music. He once wrote, “I hardly knew it then, but I had at a very early age made a giant step to becoming a composer."

He attended New York City's High School of Music and Art, where at the age of fifteen he performed his own piano concerto with the school’s orchestra. In 1943 began serving in the United States Army as a radio operator with the 69th Infantry Division. He lost his brother Jack in the war and himself was present at the Battle of the Bulge and the taking of Leipzig. He later wrote: “We became aware of the horror, and what we now call the Holocaust, while freeing Leipzig.”

Shortly after the war ended, Laderman wrote a four-movement piece that became known as the Leipzig Symphony. After performing a piano reduction, he became an orchestrator with the G.I. Symphony Orchestra. Laderman was discharged from the army on April 22, 1946.

He enrolled at Brooklyn College upon return to civilian life, studying composition and earning his B.A. in 1950. He went on to Columbia University, where received his M.A. in 1952. As Allan Kozinn wrote in the New York Times in 1989, Laderman “studied composition with Stefan Wolpe, who led him away from tonality, and later with Otto Luening and Douglas Moore, who persuaded him to temper his atonal style by indulging his melodic gifts.”

Laderman’s commissions have included works for the New York Philharmonic, Chicago Symphony, Los Angeles Philharmonic, Philadelphia Orchestra, Pittsburgh Symphony, and the orchestras of Minnesota, Dallas, Houston, Detroit, and New Haven. His operas included Marilyn, based on the life of Marilyn Monroe, which premiered at the New York City Opera in 1993; the opera had “an eclectic, accessible score that mixed expressionistic atonality with boogie-woogie, jazz and popular dance rhythms.” He has written for such chamber ensembles as the Tokyo, Juilliard, and Vermeer quartets and for soloists Yo-Yo Ma, Jean-Pierre Rampal, Sherrill Milnes, Emanuel Ax, and many others.

In 2008, the Yale School of Music celebrated Laderman’s 20 years there with a concert at Carnegie Hall. “The Music of Ezra Laderman” featured performances by YSM faculty, students, and alumni, including bassoonist Frank Morelli, pianists Greg Anderson and David Kaplan, and violinists Nicholas DiEugenio and Katie Hyun.

Even after his retirement, Laderman continued to write music. Less than a year ago, Yale faculty cellist Ole Akahoshi gave the world premiere of Laderman’s second Partita for solo cello. In addition to his longtime appointment at Yale, Laderman taught at Sarah Lawrence College and SUNY Binghamton.

Albany Records has released a nine-volume set called The Music of Ezra Laderman, focusing on his chamber output over many years. Each performance of the 27 works was supervised by the composer. As Laderman remarked in the liner notes:

My compositions have embraced a pluralism of musical gesture. It is the path taken. A path taken not with the intention of making a different sound, but a good sound—one that was mine… I have never agreed that ‘new’ translates to important. I have simply wanted to extend the Western canon with my own voice.

Other recordings of Laderman’s music include the Concerto for Double Orchestra with Hugh Wolff and the New Jersey Symphony (New World); Citadel, Sanctuary, and the Violin Concerto with the Louisville Orchestra and conductor Lawrence Leighton Smith (First Editions); Pentimento with the Albany Symphony and Julius Hegyi (CRI), Concerto for Orchestra with the Baltimore Symphony and Sergiu Commisiona (Desto), Piano Etudes with Ilana Vered (Connoisseur), and the String Quartet No. 6 with the Audubon Quartet (RCA Victor).

Robert Blocker, Dean of the Yale School of Music, said: “The loss of Ezra Laderman greatly diminishes our community, but his life and music enlarged us and, indeed, all of humankind.”

In lieu of flowers, memorial gifts may be made to the Ezra Laderman Composition Prize at the Yale School of Music.