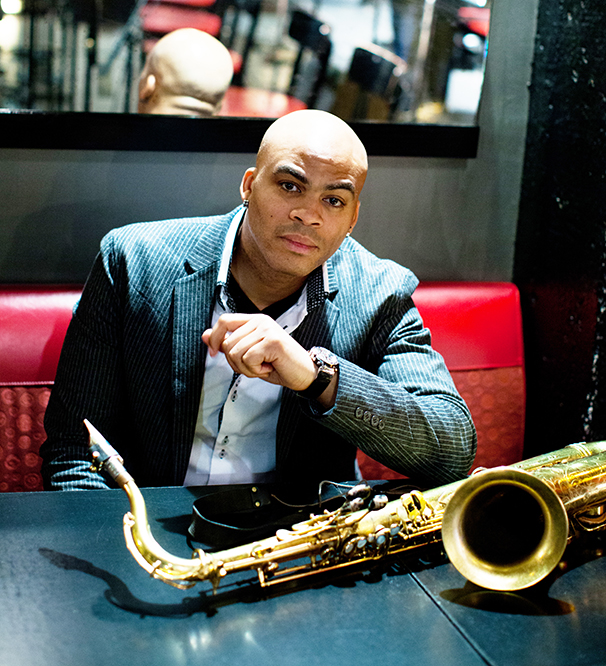 Asked about the influence that Lee Morgan has had on him, Grammy Award-winning faculty saxophonist Wayne Escoffery said, "As a young man, his music really caught my ear," specifically because it combined styles. "One of the traits of Lee Morgan and one of the inspirational things about his music," Escoffery said, is that it "was really a great fusion of a lot of the modern elements" of the music of the early-to-mid 1960s "with a lot of the soulful and groove-oriented elements" of the time.

On Friday, Feb. 2, Escoffery and his quintet — featuring trumpeter Jeremy Pelt — will present "Delightfulee Morgan," a program of music by the late, legendary trumpeter and composer Lee Morgan. The program's title comes from Morgan's 1966 Blue Note album, Delightfulee. The concert will showcase compositions by Morgan that are seldom heard and, in some cases, unrecorded.

It was after being approached by jazz historian and archivist Bertrand Uberall, who'd come across a trove of Morgan's unheard music at the Library of Congress, that Escoffery began conceiving what would become the Feb. 2 Ellington Jazz Series program. That process began with finding a trumpeter who he felt could uniquely serve Morgan's music. Enter Pelt.

"Jeremy and I go way back to college days," Escoffery said, explaining that when he was a graduate student at the New England Conservatory, Pelt was a student at the Berklee College of Music. Pelt, he said, has long been a student of Morgan's music. There "could not be a better choice" than Pelt to present Morgan's music, Uberall offered.

Uberall said there's "no reason to believe [Morgan] ever performed" this music, the rights to which are held by Kiko Morgan, to whom the celebrated trumpeter was married but estranged from at the time of his death. Kiko Morgan gave Uberall permission to have the music performed.

Morgan recorded and performed with the likes of such iconic artists as John Coltrane, Dizzy Gillespie, and Art Blakey and was a prolific composer with his own impressive discography. He was shot and killed in 1972 by his common-law wife, Helen Moore, who'd rescued him from drugs and helped resurrect his suffering career. That story is recounted Kasper Collin's 2016 documentary I Called Him Morgan, which Escoffery pointed out brings to life the 1960s jazz scene in New York — particularly the feeling and the energy surrounding Slugs' Saloon. "That musical atmosphere was really inspiring to me," Escoffery said.

Escoffery's Feb. 2 program "Delightfulee Morgan" will celebrate an artist whose music and inimitable performances have long inspired many. Uberall is expected to deliver remarks about Lee Morgan from the stage, and two of Morgan's nephews are expected to be on hand.