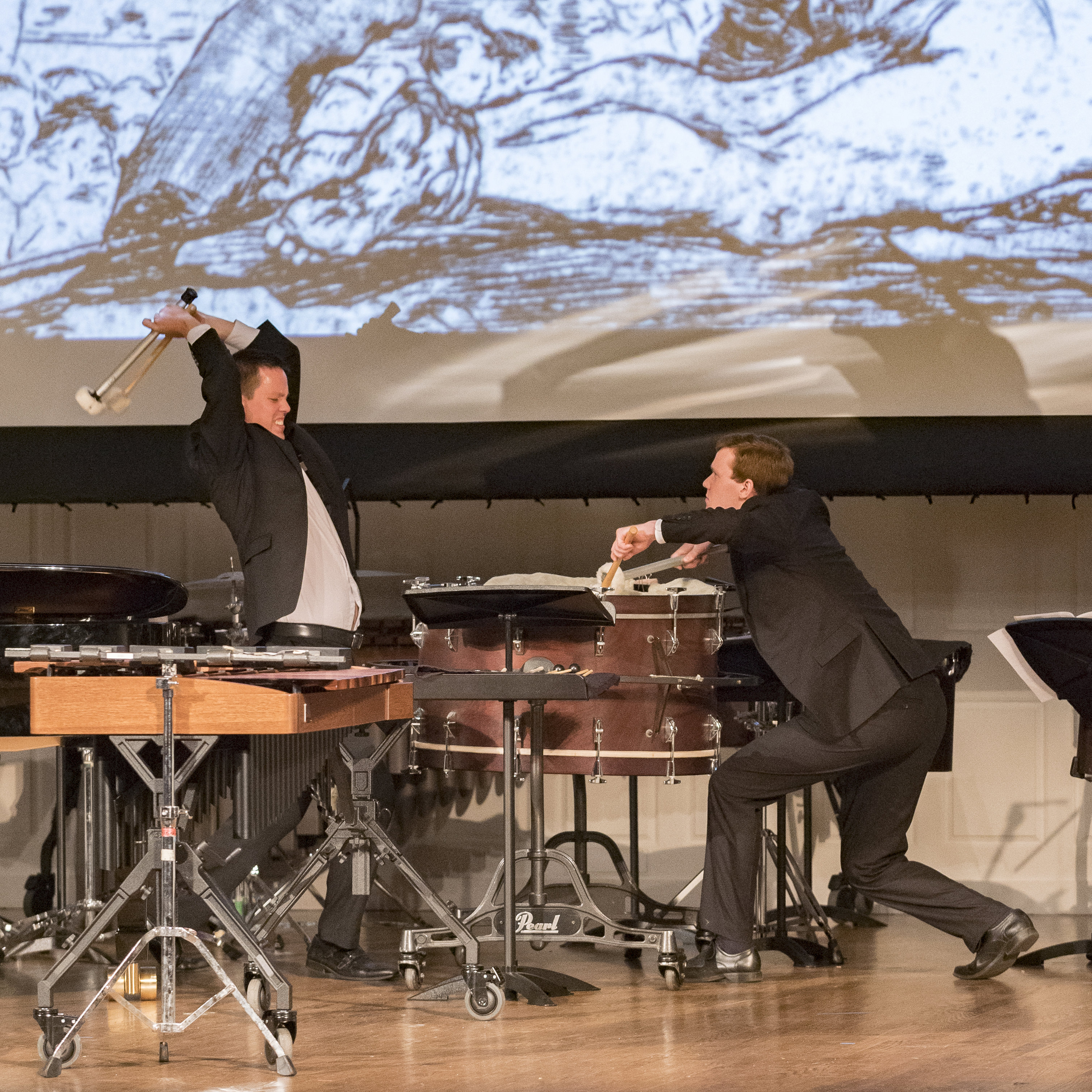 Members of the Yale Percussion Group (YPG) are a tight sextet—personally, professionally, and, most important, musically. The enthusiasm they have for being here at Yale, and for performing the repertoire that showcases their instruments and musicianship—from well-known to new compositions—is clearly reflected in their playing. This year’s Yale Percussion Group concert will feature small chamber works and solo pieces. Kevin Zetina ’20MM, who will be performing in his first YPG concert, explained, “When you work exclusively with five other people for an extended period of time you get to develop together as a unit, rather than as an individual.” Even solo performances by YPG members are imbued with the ensemble’s artistic ethos.

The YPG’s Dec. 8 program will include performances of Mauricio Kagel’s Dressur, Iannis Xenakis’ Rebonds (movement B, arranged for guitar by Manuel Barrueco and performed on marimba), a marimba arrangement of jazz pianist Keith Jarrett’s The Köln Concert (Part IIC, arranged for marimba), and James Wood’s Village Burial with Fire.

Russell Fisher ’20MMA described Dressur, a theatrical percussion work from 1977, as “a truly unique piece of chamber music,” one that constantly toys with audience expectations. Dressur features three performers (Fisher, Arlo Shultis ’20MMA, and YoungKyoung Lee ’19MMA) playing more than 50 wooden instruments, “some conventional, and some unconventional.” With its dramatically choreographed movements and staging, Dressur is as entertaining to the eye as it is to the ear—a goal of the composer, who wrote that his music was “a direct, exaggerated protest against the mechanical reproduction of music” that resulted from music after the 19th century being “reduced to the purely acoustical dimension” thanks to recording technology. “What I want is to bring the audience back to an enjoyment of music with all senses,” Kagel has said.

Rebonds is considered one of Xenakis’s most important and influential works. Shiqi Zhong ’19MM, who will perform movement B of Rebonds—a movement scored for bongos, tumba, tom-tom, bass drum, and five woodblocks—said the piece, composed between 1987 and 1989, is “all about rhythm and time.”

Jisu Jung ’19MM will perform the encore that Jarrett played at a January 1975 concert in Cologne, Germany—a performance that was recorded and released as, simply, The Köln Concert. Jarrett performed the music on a piano with which he was disappointed; Jung will play it on marimba.

Just as Dressur will showcase a YPG trio, so, too, will Wood’s Village Burial with Fire. “I’ll never forget my first time hearing Village Burial with Fire,” Zetina said. “It is safe to say that it changed my life. It is such a powerful piece of music.” The work depicts an ancient Hindu burial ceremony and begins with the performers (Jung, Shultis, and Zetina) chanting and wailing in imitation of villagers communicating with a deceased spirit. When a funeral pyre is lit after a noisy procession to the river, “it seems as though the whole village has exploded into music and dancing—soon, some go into trance,” wrote Wood, who composed Village Burial after a trip to Bali. In its visceral realism, Zetina likened Wood’s musical depiction of a funeral to that of “a field recording, rather than simply a programmatic work.”

The dedication of YPG members to their art is evident. “It is rare for a music group to rehearse only two pieces for four months and eight hours a day,” Zhong said, referring to Dressur and Village Burial with Fire. “Therefore, the level of music-making at each YPG concert is incredible.”

“Performing in YPG is truly an honor,” Fisher said. “I struggle to think of other ensembles that have such an incredible lineage of musicians. To now be a part of this ensemble and legacy is really humbling.”

The Yale Percussion Group, under the direction of Robert van Sice, will perform music by Mauricio Kagel, Iannis Xenakis, Keith Jarrett, and James Wood on Saturday, Dec. 8, at 7:30 p.m., in Morse Recital Hall in Sprague Memorial Hall. The concert is free and open to the public.