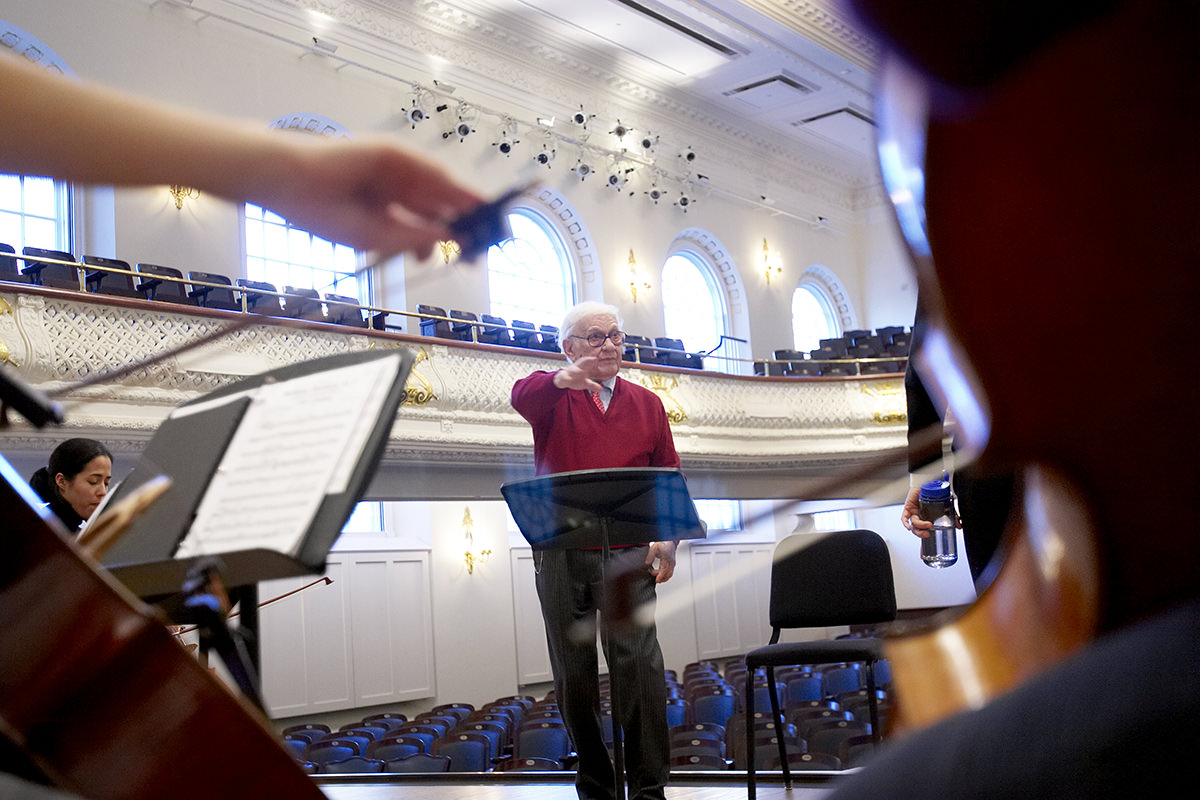 Dear friends and colleagues, I write to inform you that earlier today our beloved and esteemed Aldo passed away. Elizabeth and his sons were with him, and it will not surprise you to learn that a special recording of his music carried Aldo to his next world.

The family is making plans for a celebration of Aldo’s life, and the details will be sent to you when they become available. The family requests that memorial gifts be directed to the Yale Cellos Fund at the Yale School of Music.

The longest-serving faculty member in Yale's history, Parisot retired from YSM earlier this year. YSM celebrated Parisot's service and commitment to the School and its students with the following feature, which is forthcoming as the cover story of the next Music at Yale publication, due out in January 2019.

In addition to the below story, faculty, staff, students, and alumni are encouraged to remember Aldo in his own words through a recent faculty profile video in which he described the "great, great joy" he found in teaching.

For 60 years, cellists from around the world came to the Yale School of Music to study with Aldo Parisot '48 '70MAH, a legendary figure in the field by any standard and an inimitable presence in the School's studios and concert halls. In June, at 99, Parisot retired from teaching, eliciting reflections from those who knew and worked closely with him.

“The presence of Aldo Parisot in the School of Music has been transformative and transcendent,” YSM Dean Robert Blocker said upon Parisot's retirement. “His strongly held opinions about artistic excellence have led generations of faculty and students to carefully consider their points of view about music making, but with his rigorous intonements came a palpable love for the beauty of music and what it means to our lives.”

Parisot began cello studies in his native Brazil, where he learned from his stepfather, cellist Tomazzo Babini. "When I heard his beautiful sound, I showed the desire to play immediately," Parisot told Ralph Kirshbaum '68BA, one of his most well-known students. "But before he would give me my first lesson he taught me solfège for two years. I didn't play the cello until I was 7."

Parisot credits Babini — the only cello teacher he ever had — with helping to develop a technique that supported his creativity. Parisot made his debut with the Brazilian Symphony Orchestra at age 12. When he was 18, he became the ensemble’s principal cellist. It was in Rio de Janeiro that he came to the attention of an American attaché to the Brazilian embassy, Carleton Sprague Smith. Impressed with Parisot’s virtuosity, Smith offered to help him study abroad. Parisot was eager to study at the Curtis Institute of Music in Philadelphia with Emanuel Feuermann, who died before Parisot was scheduled to leave Brazil. Parisot’s plans changed, and, with Smith’s help, he secured a scholarship to study at the Yale School of Music, an offer he accepted on the condition that he would not have to take any cello lessons.

Parisot arrived at Yale in 1946 as a “special student.” He studied chamber music and, with composer Paul Hindemith, music theory. In 1948, he auditioned for the Pittsburgh Symphony Orchestra, with which he played professionally for two years. But the orchestral life was not for him, and he longed to have a solo career. In 1950, he gave his debut recital at Town Hall in New York City, launching an international career that produced recordings for RCA Victor, Angel, Westminster, and Phonodisc. As a performer, Parisot was renowned for his beautiful sound and astonishing technique. He performed on stages throughout the world, both as a recitalist and as a soloist with major orchestras under the batons of such eminent conductors as Stokowski, Barbirolli, Bernstein, Mehta, Monteux, and others.

Parisot was driven to expand the cello repertoire, premiering numerous works for the instrument. Reacting to his 1966 premiere of Donald Martino’s Parisonatina al’Dodecafonia, composed for and dedicated to him, The Boston Globe declared, “There is probably no cellist that can equal Parisot’s dazzling achievement.” The New York Times weighed in, saying, “Those at this performance are not going to forget [Parisot’s] feat overnight.”

Parisot is one of the rare musicians who has loved teaching as much as he has loved playing. In 1958, he joined the faculty at the Yale School of Music. Along the way, in 1983, Parisot founded the Yale Cellos, an ensemble that has earned international acclaim for its rich sound, stunning virtuosity, beloved recordings, and numerous additions to the cello-ensemble literature. In 1988, Parisot closed out a remarkable performing career and dedicated himself fully to teaching. He was named the Samuel Sanford Professor of Music at Yale in 1994, and, in 2002, received the Gustave Stoeckel Award, the Yale School of Music’s most prestigious honor.

Throughout his career, Parisot viewed his students as family. “I have a great, great joy in teaching these people,” he said in 2017. “Those are my children … I see in them me, when (I) was young, and I want to see them succeed. I am very severe, because I care about them. I tell my students, ‘Your future depends on you. You’ve got to believe in yourself. You can do it. But only you can do it. I can only help you.”

Parisot did not want his students to imitate him as a player; instead he encouraged them to be themselves. “He told me that the highest aspiration of any teacher is to bring out each student’s individual character,” cellist Eric Adamshick ’17MM ’18MMA said. Discovering each student’s unique voice often meant finding new ways of approaching a piece of music. As Parisot said to Kirshbaum in an interview with The Strad, “I learn from my own students. Every day they surprise me. They come and do something, and I think, ‘Why didn’t I do that before? I never thought about that.’”

Parisot has long been known as a generous, passionate, forthright, and rigorous mentor. In addition to Kirshbaum, his former students include Jian Wang ’88CERT, Roman Jablonsky ’74MM, Shauna Rolston ’91BA ’93MM, and Carter Brey ’79. Parisot has called his students’ successes “an incredible pleasure.” He has taken a great interest in them as individuals and encouraged them to develop their own personalities, onstage and off. “I try to make students believe in themselves,” he said, “and that includes without the cello.”Parisot’s creativity has not been limited to the performing arts. He has produced a significant number of paintings, describing his process as “painting by ear.” His visual artwork exudes his love of color and texture and in that way is reminiscent of his cello playing. Many of his works have been exhibited in concert halls and galleries around the world. He has given away many of his paintings, selling them at Yale Cellos concerts and other special events, donating the proceeds to a travel fund that he founded for YSM students.

Jenny Kwak ’17MM ’18MMA was nervous during her first lesson with Parisot. “All I could listen for were my technical mistakes,” Kwak said. “I wasn’t making any music. He stopped me and asked, ‘What are you so scared of? Do you believe in yourself?’ Surprised to hear the unexpected questions, I couldn’t answer him. He told me, ‘The most important thing is to believe in yourself.’ He showed me his paintings around the studio, and said, ‘When I created these paintings, they weren’t planned at all. I was inspired, and that’s what helped me to paint.’” The lesson learned, Kwak said, is that playing the cello is not about proving anything to the world or even to herself. It is about making something from inspiration.

As he said to Ralph Kirshbaum '68BA, one of his most well-known students, in an interview with The Strad, “I learn from my own students. Every day they surprise me. They come and do something, and I think, ‘Why didn't I do that before? I never thought about that.’” Parisot has long been known as a generous, passionate, forthright, and rigorous mentor. In addition to Kirshbaum, his former students include Jian Wang, Roman Jablonsky, Shauna Rolston, and Carter Brey. Parisot has called his students’ successes “an incredible pleasure.” He has taken a great interest in them as individuals and encouraged them to develop their own personalities, onstage and off. “I try to make students believe in themselves,” he said, “and that includes without the cello.” János Starker, Parisot’s friend of many years and a distinguished cello teacher at Indiana University, once described Parisot as “the best cello teacher I have met in my life.” Parisot’s contributions to the field are immeasurable and will inform the practice of countless cellists in generations to come.

“He helped me foster and strengthen my own artistic voice,” Adamshick said. “His repeated stress on the idea of individuality and unique expression helped me discover a whole new level of self-awareness and self-confidence.”

Perhaps his most important gift to the art form is that he did not teach his students to play like him, but, rather, encouraged each of them to discover their own voice. “There are many people who imitate their teacher,” he said. “I hate the idea that there's someone in the world who sounds like a little Aldo Parisot. You've got to be yourself. We've all got to find our own way.”

Aldo Parisot, the Cellist: The Importance of the Circle, a biography written by Susan Hawkshaw, was published in 2018 by Pendragon Press. 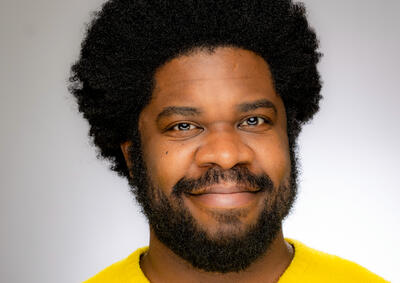 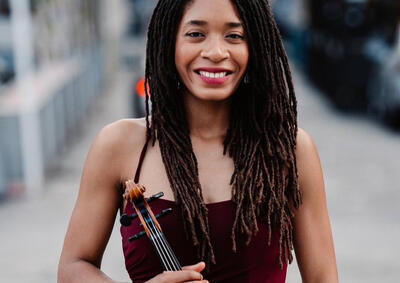