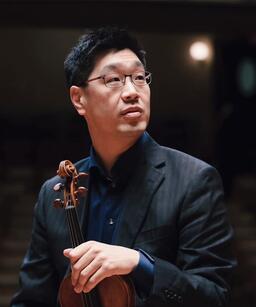 Visiting Professor in the Practice of Violin Yale School of Music
At YSM Since: 2022
Contact

Violinist Soovin Kim has performed with many of the major orchestras in the United States and aboard, presented recitals on the world’s most celebrated stages, and released recordings on the Koch Discover International, Delos, Azica Records, and Stomp/EMI (Korea) labels. He has worked and collaborated with such revered chamber musicians as Jeremy Denk and Mitsuko Uchida and for two decades was the first violinist in the Johannes String Quartet. Today, Kim is a member of the Chien-Kim-Watkins Trio with his wife, pianist Gloria Chien, and YSM faculty cellist Paul Watkins.

Kim serves as Visiting Professor in the Practice of Violin at the Yale School of Music, where he teaches individual students, coaches chamber music ensembles, and presents a master class each semester. Kim previously served on the faculty of the New England Conservatory and the Peabody Institute of the Johns Hopkins University. He has also served as Lecturer/Artist-in-Residence and Assistant Professor at Stony Brook University and as an international scholar at Kyung Hee University in Seoul. He is the Artistic Director of Chamber Music Northwest and the Lake Champlain Chamber Music Festival, which he founded, and maintains a relationship with the Marlboro Music Festival, with which he has performed on a dozen national tours over the course of nearly 15 years.