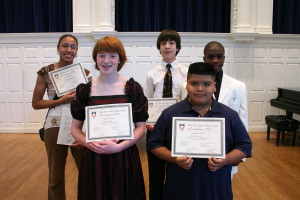 The Yale School of Music is pleased to announce the second annual Yale/New Haven Young Artists Solo Competition. The competition will be held on Saturday, May 9th, 2009, beginning at 11:00 am, at Yale University's Sprague Memorial Hall (470 College Street, New Haven). Each New Haven K-8 school may choose up to three students to compete.  The competition is open to students in fourth through eighth grades who play percussion (not piano), strings, woodwinds, and brass.

The competition is open to the public, and admission is free. For more information, visit the Yale School of Music’s new website, music.yale.edu, or call 203 432-4158.