As the Class of ’57 Visiting Professor of Music Education, Lewis guides graduate students in community engagement 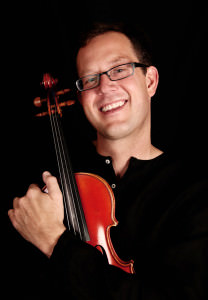 Brian Lewis, the acclaimed violinist who is also widely recognized as a leader in music education, is the Class of ’57 Visiting Professor of Music Education at the Yale School of Music for the 2010-2011 academic year. By teaching a course in community engagement, and through his work with students participating in Yale’s extensive Music in Schools Initiative, Mr. Lewis will help graduate students in the School of Music develop their skills as educators and communicators.

“We are fortunate that Brian has agreed to work with our graduate students in developing their skills as teachers,” said Robert Blocker, the Henry and Lucy Moses Dean of Music. “Our students must understand their important role as cultural leaders, and Brian is uniquely qualified to train and guide them.”

A gifted violinist known for his imaginative programming, Brian Lewis is highly regarded for his ability to communicate with audiences of all ages. He is dedicated to promoting the value of music in education, even— perhaps especially — when he is touring as a concert violinist. “Wherever I go to perform, I try to schedule some sort of teaching or school concert through the local sponsor,” he says. “It’s not always possible, of course, but I consider it a very important part of my role as a musician. Performance should be fused with music education, and I try to show how music study is relevant to other disciplines. I look forward to sharing my experience with students at the Yale School of Music as they develop their skills as teaching artists.”

The Yale College Class of ’57 visiting professorship, along with programs in the public schools and a biennial symposium on music education, is one of three components of the Music in Schools Initiative. The mission of the initiative is to support public school music and the training of young artist teachers who will help ensure the birthright of music for all children.

One of the most versatile and charismatic violinists on the current scene, Brian Lewis is an exceptionally dedicated and gifted performer whose passionate artistry has been heard and embraced around the world. Acclaimed performances include concerto debuts in both New York's Carnegie Hall and Avery Fisher Hall, as well as performances with the Orchestra of St. Luke's, Berlin (Germany), Louisiana, Kansas City, Syracuse, Odense (Denmark), Wichita, Hartford, Eugene, Spokane, and American Symphony orchestras, among others. He has recorded six CDs, most recently for Delos as soloist with the London Symphony Orchestra of music by Leonard Bernstein and Hollywood composer Michael McLean.

Mr. Lewis has won numerous young artists' competitions, including the grand prize in the Mid-America Violin Competition. In addition to the Waldo Mayo Talent Award, he holds both the Peter Mennin Prize and William Schuman Prize awarded by Juilliard for outstanding achievement and leadership in the field of music. Mr. Lewis was one of the first recipients of the Sony ES Award for Musical Excellence, and he has received two Elizabeth B. Koch Fellowships from the Kansas Cultural Trust. In 2005-06, Mr. Lewis received both the Texas Exes Teaching Award and The University of Texas School of Music Teaching Excellence Award.

Radio and television appearances include performances on WNYC, WFMT (Chicago), National Public Radio, and CBS Sunday Morning. An advocate for music education in the schools, Mr. Lewis frequently presents concerts, workshops, and master classes for Young Audiences of Houston. Named National Artist of the Year in 1998 by Young Audiences, Inc., he was also presented the 2003 Fredell Lack Award by YAH for having performed for more than 165,000 young people in the Houston area.

As a student of Eleanor Allen, Mr. Lewis began his violin studies at the age of four and participated in the Ottawa Suzuki Strings program under the direction of his mother, Alice Joy Lewis. He later studied with Tiberius Klausner, and twice traveled to Japan where he studied with Dr. Shinichi Suzuki at the Talent Education Institute in Matsumoto. He holds both the Bachelor and Master of Music degrees from The Juilliard School where he was a student of Dorothy DeLay, Masao Kawasaki, and Hyo Kang.

Brian Lewis holds the David and Mary Winton Green Chair in String Performance and Pedagogy at The University of Texas at Austin. He is also artistic director of the Starling-DeLay Symposium on Violin Studies at the Juilliard School in New York City, concertmaster of the River Oaks Chamber Orchestra in Houston, founding member of the Texas Piano Quartet, and artistic director of the Starling Distinguished Violinist Series at UT.