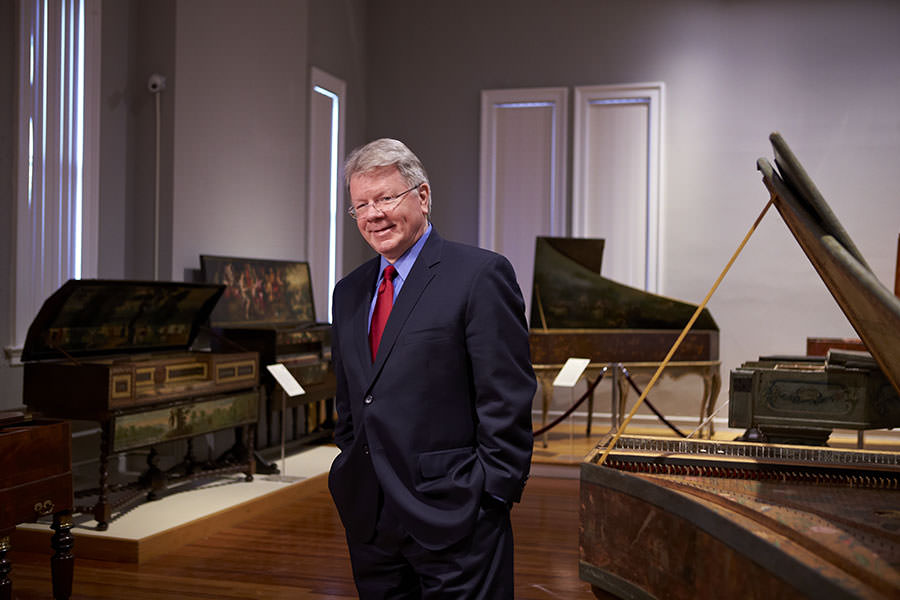 The Yale School of Music is pleased to announce that William Purvis has been appointed as the Director of the Yale Collection of Musical Instruments.

Purvis, a horn player, conductor, and educator, has been serving as the Interim Director of the Collection since 2008. After several years as a faculty artist at the Norfolk Chamber Music Festival/Yale Summer School of Music, William Purvis joined the Yale School of Music faculty in 1999. His international distinction as an artist and artist-teacher of horn continues to draw a vibrant and talented cadre of horn students to the School. In 2003, Purvis became the Coordinator of Winds and Brass, and in the 2008-09 concert season he was the artistic director of Messiaen Centenary Celebration at Yale.

Robert Blocker, the Dean of the Yale School of Music, said, “In the transitional period that Bill Purvis has served as Interim Director, the Collection has enhanced its artistic offerings, taken measures to preserve and sustain its holdings, and engaged the Yale and professional communities in its activities.” Blocker cited Purvis’s leadership, his broad musical interests, and his commitment to the Collection as compelling reasons for the appointment.

About the Yale Collection of Musical Instruments

In addition to musical instruments, the Collection includes numerous accessories such as bows and mutes as well as paintings, drawings, and books relating to the instruments and their musical cultures. The Collection maintains regular public visiting hours and serves as a laboratory for courses in the history of musical instruments. It also presents an annual series of concerts as well as gallery talks, demonstrations, master classes, and other special events.

A native of Western Pennsylvania, William Purvis pursues a multifaceted career in the U.S. and abroad as horn soloist, chamber musician, conductor, and educator. A passionate advocate of new music, Mr. Purvis has participated in numerous premieres as hornist and conductor, including horn concertos by Peter Lieberson and Bayan Northcott; trios by Poul Ruders and Paul Lansky; and Steven Stuckey’s Sonate en Forme des Préludes with Emanuel Ax at Carnegie Hall. Mr. Purvis is a member of the New York Woodwind Quintet, Orchestra of St. Luke’s, Yale Brass Trio, and Triton Horn Trio, and is an emeritus member of Orpheus. A frequent guest artist with the Chamber Music Society of Lincoln Center, he has also has collaborated with the Tokyo, Juilliard, Orion, Brentano, Mendelssohn, Sibelius, and Fine Arts string quartets. His extensive list of recordings ranges from original instrument performance to contemporary solo and chamber music, as well as recordings of contemporary music as conductor. Recent recordings include the Horn Concerto of Peter Lieberson on Bridge (a disc that won a Grammy and a WQXR Gramophone Award); works of Schumann; Paul Lansky’s Etudes and Parodies for violin, horn, and piano; Schoenberg’s Wind Quintet with the New York Woodwind Quintet; and Richard Wernick’s Quintet for Horn and Strings with the Juilliard Quartet.