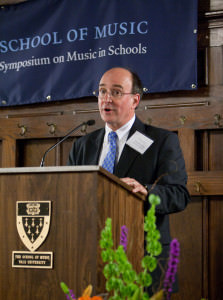 The National Guild Service Award is offered for outstanding achievement to individuals who have given exceptional service to the National Guild and the community arts education movement. Past recipients include Betty Allen, Lolita and Azim Mayadas, Robert Capanna, Stephen Shapiro and Ed Farmilant. Formerly called the President’s Award, it was established in 1989.

Michael Yaffe has been dedicated to the growth of the field of community arts education for nearly 35 years. Prior to coming to the Yale School of Music in 2006, he served as executive director of the Hartt School of the University of Hartford from 1986 to 2006, greatly increasing its student population, expanding its faculty and initiating new programs to make high quality arts education accessible to all. Yaffe was a member of the Guild’s board of trustees from 1999 to 2006 and is currently chair of the Accrediting Commission for Community and Precollege Arts Schools. He also served on the board of the National Association of Schools of Music and was chair of its non-degree-granting commission.

Founded in 1937, the National Guild for Community Arts Education is the sole national service organization for community arts education providers. Its dynamic member network includes community schools of the arts, arts and cultural centers, preparatory programs, and arts education divisions of performing arts companies, museums, parks and recreation departments, and others. The organization supports and advances access to lifelong learning opportunities in the arts.