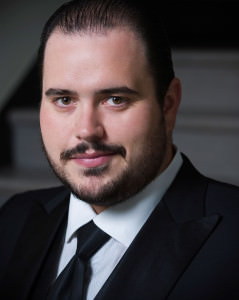 My career as an opera singer necessitates constant travel, which is one of the real perks of my job. Most recently I represented Yale Opera at the Beethoven Easter Festival in Warsaw, Poland.

Every time I visit this city, the first thing that comes to mind is the country’s difficult past. I see remnants of their history in the architecture, the streets, the local markets, and even their food. It is soul stirring to share beautiful music with Warsaw and its people.

The first week of April, I sang the role of Avito in the festival's concert version and recording of Italo Montemezzi's L’amore dei tre re (The Love of Three Kings). This piece is rarely performed, and only has two known recordings (three after ours is mastered and produced.)

The Polish Radio Symphony Orchestra and Warsaw Philharmonic Choir are crisp performing groups oozing with musicality. As soon as the last, rich chord sounded, and the conductor’s baton became motionless, our hard work was celebrated with a rush of applause, cheers, and a sea of smiles – two from my own mother and father.

Yale Opera is becoming an entity at the Beethoven Easter Festival. I’m proud to be a part of this ever-growing relationship, as it has offered me a chance to develop a number of personal and professional attributes, while simultaneously exposing Poland to some of America's (and specifically Yale's) musical talents.

Being a professional singer isn’t the easiest job in the world, but when I see blissful faces listening to the music we create, it certainly seems to be one of the most rewarding.