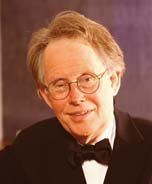 Buryl Red ’61MM, a conductor, producer, and arranger known world-wide as the musical director of The Century Men and composer of the 1972 classic Celebrate Life, died April 1. Red, 77, was born in Little Rock, Ark., and studied at Baylor and Yale Universities.

Described by the Washington Post as “uncommonly creative,” Red’s extensive body of works includes more than 1,600 published compositions and award-winning arrangements. He was the conductor of the Century Men, an auditioned men’s chorus of professional musicians who perform in Baptist churches across the world. Greg Stahl, the executive director of the Century Men, described Red to ABP News as a “true giant” in the world of Baptist church music.

In 1972, Red wrote Celebrate Life, a musical collaboration with book and lyrics author Ragan Courtney, which has become a classic work for Southern Baptist youth choirs. The 1991 song “In Remembrance” is from the musical.

Stahl said, “I wonder if we will ever see another Buryl Red.”