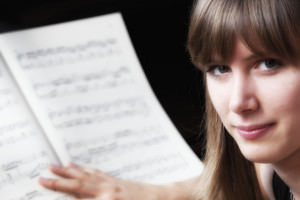 Suzana Bartal has been named the winner of the NYCA (New York Concert Artists and Associates) Concerto Competition.

There have been three rounds: the first one - preliminary on recording, and semifinal and final live auditions in New York. 12 pianists advanced to the semifinals and 4 to the finals.

As the winner, Bartal will perform a concerto with the NYCA Symphony Orchestra in the Winner's Evening, as a part of next season's "Evenings of Piano Concerti" Concert Series. The Winner's Evening will be fully promoted by NYCA to media and journalists in New York City, and will be written up by the New York Concert Review.

Born in 1986 in Timisoara (Romania), Suzana Bartal started playing the piano at the age of 8 and made her debut with orchestra at the age of 13. She has appeared in such prestigious venues as Musee d'Orsay in Paris, Radio France, and the Music Academy in Budapest, and her numerous recital appearances have taken her through Romania, Hungary, France, Italy, Holland, and Germany.

A prizewinner in numerous national and international competitions since the age of 11, Suzana has also been awarded scholarships by the Yamaha Music Foundation of Europe, Nadia et Lili Boulanger Foundation (Paris), Mécénat Musical Société Générale, the ADAMI and the Williamson Foundation. Her appearances were broadcasted on several national radio and television channels in Romania, Hungary, as well as in France.

Recent competition prizes include: 1st prize and Faure special prize at the Concours International d'Ile de France, 1st prize at the Lagny-sur-Marne international competition, 2nd prize and Debussy prize at the Agropoli international competition (Italy), the 3rd prize at the FLAME competition Paris. In December 2010, Suzana was a finalist in the international piano competition in Campillos (Spain). After graduating with outstanding honours from the music-high school in her hometown, Suzana pursued her studies in France with Denis Pascal, Pierre Pontier and Florent Boffard in Paris and at the Conservatoire National Superieur de Musique Lyon. She also received advice from musicians of high reputation, such as Andras Schiff, Menahem Pressler, Tamas Vasary, Claudio Martinez-Mehner, Aldo Ciccolini, Klaus Hellwig, Matti Raekallio, Anne Queffelec, Jean-Claude Pennetier, and others.

Since September 2011, Suzana has been studying with Peter Frankl at the Yale School of Music. Recent highlights include masterclasses with Thomas Adès at the International Musician’s Seminar Prussia Cove (UK) and a recital in the Festival Jeunes Talents (Paris). Suzana is a recipient of the Harriet Gibbs Fox Memorial Prize awarded by Yale in May 2012.