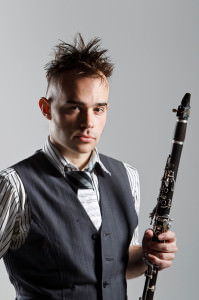 Clarinetist Ashley William Smith, winner of the 2012 MCA Freedman Fellowship, otherwise known as the ‘genius' award, and former student of UWA's School of Music, has been appointed to the role of Head of Woodwind and Contemporary Performance at the University of Western Australia.

In addition, Ashley will become the official Artist in Residence of the UWA School of Music.

In 2012 Ashley graduated with a Master of Music degree from the Yale School of Music, where he studied under David Shifrin. that same year, he won the prestigious Freedman Fellowship for Classical Music, awarded by the Music Council of Australia. Previously, Smith studied at the Australian National Academy of Music (ANAM), Australia's premier institution for training young classical musicians. During his time at ANAM, Ashley won both the jury and audience prizes in the 2009 ANAM Concerto Competition, and he received the 2010 Academy Fellowship and the inaugural Harold Mitchell Fellowship.

Also in 2010, Ashley won the prestigious ABC Symphony International Young Performers Award. An alumnus of the UWA School of Music, Ashley graduated with First Class Honours in 2008, winning many of the School's most prestigious prizes as well as the Sir Harold Bailey Award for the most outstanding graduate of the Faculty of Arts.

Smith has performed as a soloist with several Symphony International network orchestras and has toured extensively throughout Australia, Asia, and the United States as a recitalist. The announcement quoted Dr. Alan Lourens, Head of School, as saying, "Ashley is an exciting performer, an innovative musician, and an inspiring teacher and mentor to young musicians. The appointment of Ashley continues the tradition of appointing outstanding musicians to the UWA School of Music, following on the heels of performers such as Paul Wright and Craig Ogden, performer/composer James Ledger, and composer Roger Smalley."