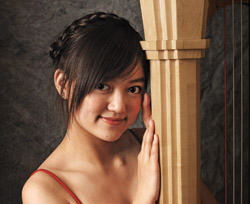 While studying at Yale, Grace won the Anne Adams Award from the American Harp Society. She was also the first prize winner in the senior division of the harp competition in the American String Teachers Association (ASTA) Solo Competition in 2011, and she was awarded a fellowship to Tanglewood in the summer of 2013.