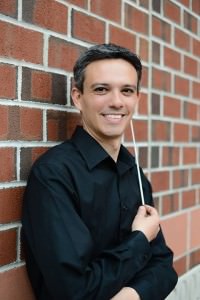 In addition to serving as Chorus pro Musica’s music director, Kirsch is also director of choral activities at Tufts University, where he conducts the Tufts Concert Choir and Chamber Singers, and teaches music theory and conducting.

Kirsch believes most people are capable of being taught music, but added for some it’s just innate.

“I think most people are moved by some kind of music,” he said. “I feel lucky to be able to mke my living in music.”

Kirsch’s history with music goes back a long way. Growing up on Long Island, his parents always had music playing in their house. Then, when Kirsch started Kindergarten he had an amazing teacher who urged him to get involved with the chorus.

“I thought he was the coolest thing ever and I wanted to be like him,” he said of the teacher. “(Singing in the chorus) was my favorite thing to do.”

Kirsch got away from the chorus in his later elementary school years and began playing the violin and viola in the school’s orchestra. He also learned to play piano.

When Kirsch got to high school, he joined the chorus.

Music was also what brought Kirsch and his future wife, Diana Lemly, MD together after meeting while singing in the choir at Yale.