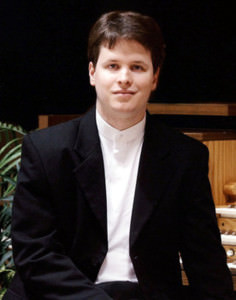 Paul Jacobs is the current Chair of the Organ department at the Juilliard School. In 2003, the Curtis and Yale alumnus was appointed a member of faculty at the age of 26. A Naxos recording of Messiaen's 'Livre du Saint Sacrement' was awarded 'Best Solo Instrumental Grammy of the Year' in 2011, making Jacobs the first organ soloist to win a Grammy. This afternoon at Davies Symphony Hall, he offers a solo recital of works by Bach, Mozart, Guilmant, and Reger. Below is a transcript of our recent San Francisco conversation with the brilliant organist, Paul Jacobs.

EH: The organ has such a long and rich history. So many of the great composers of the past composed for it and knew it intimately. What happened to the organ and its incredibe traditions ?

Jacobs: Some organists lost sight of the point of music-making, which is to stir the soul — or, at the very least, to entertain. They assumed a more dogmatic approach to organ performance, where there is a right and a wrong way, instead of a strong or a weak one. Over time, organists became more concerned about what their peers thought of them than general audiences. As their playing gradually became more 'correct', the audiences for organ music diminished. Personally, I would rather be offended by a musical interpretation than bored!

Audiences simply want to be moved. They are not preoccupied with questions of style. Style is of secondary importance, in my opinion. It is synonymous with fashion, and fashion constantly changes. A musician might make the voluntary decision to study historical performance practice techniques, but the main objective should always be to capture the essence of a piece of music, which, I believe, is fixed, unchanging, and immutable.

Hearing Wanda Landowska play The Well-Tempered Clavier on the Pleyel harpsichord - an instrument quite unlike its historical counterparts - is surely no less legitimate or compelling; hearing Mozart on a modern grand-piano is no less worthy, artistically speaking, than hearing it played on a more stylistically 'pure' forte-piano. Organists today must strive once again for that red-blooded music-making, on par with the finest pianists, violinists, and singers.

EH: How would you describe the difference between the essence of a piece of music and the style of it - which may be realized in pursuit of that essence ? Isn't it the work of teachers to pass on the essence of a given piece ?

Jacobs: I fear that many teachers are not geared enough toward helping their students capture the essence of music. I’m not talking about playing a piece competently. This is a very difficult concept to articulate or define. But the essence of a piece, I would argue, is not merely checking all the right boxes and playing music in an appropriately stylish or sensitive manner. Rather, it is deeply spiritual; it is something that speaks directly to the heart in a pure and real way. However one goes about doing this is of less interest to me. The essence of any work of art, I believe, attests to an immaterial reality which connects itself directly with the human soul. It's positively thrilling to experience.