On a balmy Thursday last week, the students of Morse Summer Music Academy fanned out across New Haven for the first of their new “pop up concerts,” setting up shop inside the Peabody Museum and outside the Yale School of Music. Katherine Roque led the charge in a thicket of high school-aged students, joining an ensemble that was down one flutist. A few blocks away, Jocelyn Hernandez, Jesus Cortes-Sanchez and Richard Romero looked after the groups they had been “coaching” for a mere three days, readying them for their first public appearance. 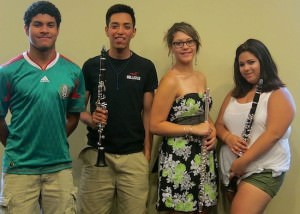 What sets Roque (flute), Cortes-Sanchez (clarinet), Hernandez (clarinet) and Romero (alto saxophone) aside from the other teachers this summer is not just their bubbly and hands-on approach, but their age. Unlike the Academy’s typical bunch—graduate students at the Yale School of Music and several New Haven Public Schools (NHPS) teachers—the four are newly minted high school graduates, and the Summer Music Academy’s first crop of NHPS student interns. All four are also New Haven Promise scholars.

In its fifth year, the Morse Summer Music Academy – a free, four-week summer intensive for NHPS students that is part of the multifaceted Music in Schools program – decided to take on the four in a different capacity because they have been with it from the beginning.

“So here’s what we decided. Here are kids that have graduated from our programs, they’ve been in our programs forever. We’ve got School of Music graduate students, we’ve got New Haven Public School teachers, wouldn’t it be great to also have them,” explained YSM’s Associate Dean Michael Yaffe.

“These are four of the classiest young people I’d ever want to meet. They are so enthusiastic about going on and becoming teachers, and they’re just great people,” he added.

With funds from the program’s endowment, the Summer Academy was able to provide the four with “a small stipend” for the summer. In the arts, where internship positions are often unpaid and held by the privileged few who can “afford” them, it was an important issue for Yaffe and Rubén Rodríguez, director of Music in Schools and the summer program. “Our fields are really complicated, and diverse. How you deal with the reality of what America is now and convincing both the organizations and the donors ... that the world isn’t the same world it was 50 years ago ... that’s what I’m loving about this microcosm and with these kids. We are happily providing these kids with some summer resources,” Yaffe said. For the four interns, the month-long program is both a learning experience and a way to give back to the community that has nurtured them for several years.