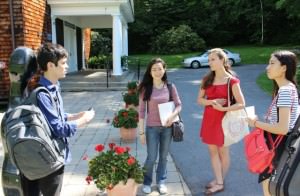 The campus of the Yale Summer School of Music in Norfolk is almost deserted on a sunny day in July, but fragments of music float in the air from all sides. A brass ensemble is rehearsing in a stone structure near Mountain Road. A pianist is banging out a passage in the studio next to Spaulding Brook. And up on the hillside, near the site of the old greenhouse, a low brick building is leaking music out of every corner. This is where the Amici Quartet is rehearsing.

Director Paul Hawkshaw explains that some groups come to the Norfolk Chamber Music Festival pre-formed. The members of the East Rock Brass Quintet, for instance, attend the Yale School of Music and perform together during the year. The string players of the Amici, however, had never met before the previous week. They will play together throughout the six weeks of the festival, sometimes accepting an extra player for a particular piece or going on loan to another group.

It is early afternoon, almost time for the Amicis’ coaching session. Herbert Kefer, violist with the Artis Quartet and a visiting faculty member, sits on the porch of the Greenhouse with a Beethoven score in his lap. At the sound of the church bell, he nods and ushers me into the rehearsal studio, a small cinder block room with five folding chairs and a grand piano, where the Amici Quartet is already practicing.

The students breakfast together at 8 a.m. in the dining hall at Battell, a small white building by the village green, then work on their parts alone for an hour or two before convening with their ensemble at mid-morning to rehearse the current piece or pieces. The whole school takes lunch at noon, many choosing the outdoor tables on the lawn when the weather permits. The afternoon often has one or several coaching sessions, interspersed with more practices and, toward the end of the week, performances.

Kefer, a rotund and genial man, props himself on a cabinet at the head of the room, and the quartet strikes up the first courtly strains of Beethoven’s Op. 18 No. 2.

The effect is incongruous, the sound deeply resonant in the small space, the pattern almost too intricate for the bare setting, the gestures and attitudes of Viennese society startlingly vivid. Kefer whisks the whole construct away with a wave of his hand.

“Do you play tennis?” he asks the first violinist, Pauline Kempf. He mimics hitting a forehand volley with a broad sweep of his arm. “Relax your elbow, use the full length of the bow!”

The players resume where they left off. String quartets have been described as a conversation between four instruments. This one seems a light-hearted exchange of civilities: one instrument bows to another, the other curtsies back. The tone is high-spirited but formal.

“We try and expose our young players to classic and well-known pieces so they get a chance to learn the repertoire,” says Paul Hawkshaw. Beethoven’s Second String Quartet in G Major (as Op. 18, No. 2 is also known) was composed in 1798 or 1799 before the composer’s 30th year and published with the five other quartets of Opus 18 in 1801. It has four movements in the classic pattern of fast, slow, fast, fast. The statement of a phrase often moves dizzyingly from instrument to instrument, returns embellished to its source, breaks into fragments and is restored by all the voices playing in unison.

“Very nice, very nice,” Kefer interrupts. He addresses the second violinist, Mann-Wen Lo: “Start bowing close to the bridge earlier, before your solistic places, because it takes time to find it.” He then leans over Hyeree Yu’s score and points to a passage, “Ti-ta-tim, yes?” and listens while she plays the phrase on her viola. “And Richard,” he says, turning to the cellist, “you can support that more.”

The four members of the Amici Quartet are in their early twenties and have come to Norfolk from distant parts of the world. Richard Narroway, the cellist, is from Sydney, Australia but has spent the last five years in the U.S., most recently at Juilliard, and his Aussie accent surfaces only in occasional broad vowels. Hyeree Yu, the violist, is from Korea, but she studies at Yale, as does Mann-Wen Lo, from China. The first violinist, Pauline Kempf, is from Paris and studies at the University of Vienna. 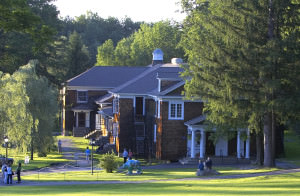 All of them took up their instruments at the age of five or six. Kempf, one of four children, said that all her siblings had played an instrument “the way you might play a sport” but that only she “had pushed it further,” enrolling at the Geneva Conservatory of Music after high school and moving on after three years to Vienna, where one of her instructors was Kefer’s colleague, Peter Schuhmayer, first violin of the Artis Quartet, who had encouraged her to apply for a fellowship at the Norfolk Festival.

Students apply in winter and spring, sending audition tapes and videos to the festival offices in New Haven. After an initial screening, a number of applicants are invited to Yale for interviews. “We try and do live interviews with all the candidates we like,” says Paul Hawkshaw. “We feel it has to work out socially as well as musically, because we do spend six weeks at very close quarters.” Sometimes Hawkshaw conducts interviews in Europe, as was the case with Kempf.

After an hour, the quartet passes to the second movement, the adagio. Kefer tries to broaden and relax the group’s playing. They leave off after an hour and half, only partway through, but the Amicis are far from done for the day. They have a second coaching session in late afternoon to work on another piece, the Schumann Piano Quintet, for which the young piano player Chelsea Wang will join them. They plan to much of the time till then practicing.

In front of the Music Shed, a bunch of young musicians are milling around, waiting for the key to turn up. A young man sits in an Adirondack chair on the lawn, blowing softly into a French horn. A young woman, also holding a horn, flops into the seat beside him: “Let’s play something.”

When Stephen Taylor, oboist and faculty member, arrives with the key a few minutes later, the two leave off their duet to join the others inside. Standing in a semi-circle onstage, the group rehearses a suite of sprightly dance tunes from the Renaissance. The oboes, clarinets, horns, bassoons and a flute are divided into two choirs, backed by a lone percussionist. Taylor is relaxed, occasionally stopping the music for a comment. “That crescendo we’re playing won’t be heard out there,” he says, waving his oboe toward the empty seats of the Shed. “Let’s put some make-up on it.” And at another point, “OK, let’s really honk those eighth notes out. Let’s wake up the king and the queen.” The music, originally played on crumhorns, sackbuts and recorders, is festive.

As the group breaks for lunch, Taylor twists the reed off his oboe and hands the instrument to his counterpart, the young oboist Noah Kay, who inserts his own reed and tries out a few runs. “Different, isn’t it?” says Taylor. The two set off to lunch together discussing whether to ornament some of the repeats and transpose Kay’s solo up an octave.

Late in the afternoon I rejoin the Amicis for their coaching session with pianist Peter Frankl. An elder statesman of the Norfolk Festival, he is a faculty member of several decades’ standing and has concertized around the world. “It was good to have him coaching the Schumann,” Narroway said later. “He’s played it hundreds of times.” 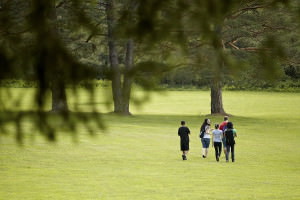 The Amicis meet in the airy rehearsal space known as Brookside, a one-room stone building by the bridge over Norfolk Brook. Frankl, who is Hungarian-born, settles into an armchair, and the group, augmented by the pianist Chelsea Wang, take their places. They look poised and energetic despite the long day. Yesterday they worked on the first and second movements; today they will present the third and fourth.

“I should warn you,” says Wang, “the fourth movement is still pretty fresh.” Frankl frowns: “What do you mean? Everything is fresh, you have just started.”

They launch into the third movement, the scherzo, a propulsive series of rising scales on the piano, with the strings almost struggling to keep up. Wang’s head is bent over the keyboard, her fingers flying, the music moving at a breakneck pace.

“Good, the tempo is very good,” says Frankl, interrupting. “Chelsea, you have learned the piece by heart?” Wang nods and smiles.

They resume. Suddenly the music has quieted, the first violin—now played by Mann-Wen Lo—takes up a haunting melody, and the other instruments join in. Frankl waves his hand: “Before the pianissimo you can have a little gap. Play again.”

For an hour, they play and Frankl suggests adjustments: “Chelsea, the first eight bars are yours, but afterwards you must keep the intensity but not the volume.” Or: “I think no rallentando here, the music will calm itself, you must stay in the rhythm.”

A sudden rainstorm brings the smell of wet earth into the room through the open windows. The students are working on the fourth movement, a passage where the instruments, having argued, seem to be in accord. One and then another proposes the same musical phrase, with answering verve and conviction.

“Don’t rush, don’t rush,” says Frankl. “From experience I know that at concert you are tempted to go even faster, so be kind to yourself, not too fast.” The rain stops, the sun streams in, an hour and a half have passed and the strong finale to the fourth movement has been played and critiqued.

“OK,” says Frankl, “so I would like to hear tomorrow the whole thing.”