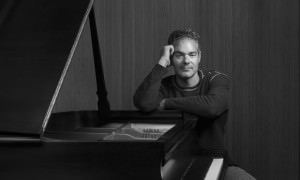 What can I say about composer Marco Beltrami? Academy Award nominee for his brilliant work on both "The Hurt Locker", which won Best Picture in 2010, and the terrific remake of "3:10 To Yuma" starring Oscar Winners Russell Crowe and Christian Bale. He redefined the horror genre with his classic horror music for "Scream", "The Woman In Black", "The Faculty", "Dracula 2000", "The Thing" and "Mimic"[…]

Truthfully, I don't think that there isn't a genre of film that Marco isn't capable of tackling and whose music would no doubt make that particular film that much better. What makes him so special is that his music just gets better and better with time and that is why directors such as Tommy Lee Jones, Alex Proyas, James Mangold, Len Wiseman and of course, Wes Craven will always call upon him to be their go to musical voice of both movie logic and reason. Every musical note counting for something special for each scene his baton is raised in the air conducting on the scoring stage.

For this very, very special interview with Marco, he candidly talks about his latest film "The Giver" based on the book by Lois Lowry (and his own personal favorite) starring Oscar Winners Jeff Bridges and Meryl Streep, his work on the critically acclaimed action-thriller "Snowpiercer" and touching upon some of his earlier work and future project, "The Homesman" directed by Tommy Lee Jones and starring Jones with fellow Oscar winners Meryl Streep and Hilary Swank coming in November. So please sit back and enjoy our conversation.

Let’s talk about your latest film, “The Giver,” starring Jeff Bridges and Meryl Streep. What interested you in the project that made you want to do it?

MB: I was a fan of the book from when both of my kids as teenagers had to read it in school. When I heard that Phillip Noyce was directing the movie, I was excited about it. I met Phillip and spoke to him about his ideas and what he was looking for musically. I wrote some musical ideas inspired by the conversation and the script. That’s what got me the job.

After viewing the film, did you have an idea of what you wanted to do musically or Director Phillip Noyce, tell you this is what would like for this scene and that scene?

MB: Actually, this film was unique in that I wrote the main theme to the movie before they had shot it. When I sent my original demos to Phillip, little did I know that he actually used that music for Jeff Bridges to learn on piano, and they filmed the movie to the music. It was a little different than normal. So by the time I actually got the footage, the tone of it and the score had already been set.

When you begin to write your scores and in particular this film, is there a process you go through personally that you feel gives you ideas to come up with themes for the score?

MB: I usually start from the most general to the more specific. I’ll get an emotional overview for the film as a whole, trying to pinpoint what the musical identity is and come up with thematic ideas - any ideas that identify as succinctly as possible what the film is. From there I break off and record individual scenes and then hope that everything relates to the core theme.

How much music did you end up writing for the film?

What were the recording sessions like from your point of view?

MB: The recording sessions went very smoothly. We had top notch musicians and they always bring the score to life. Without musicians it’s just abstract notes on a page.

What was it like to work with an esteemed director such as Phillip Noyce, who has worked with Composers such as James Horner, Graeme Revell and Craig Armstrong?

MB: He was very hands-on. He had a lot of input on the scenes. He becomes obsessed with the details of his films, as a good director should, and we would have Skype meetings almost every day.