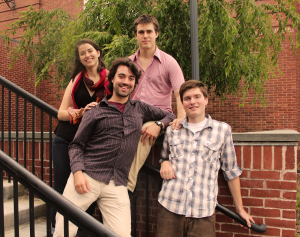 Department of Jazz, a New Haven-based group of YSM students and alumni, is undertaking a two-week residency in Schleswig-Holstein, Germany. As part of the residency, which is connected to Neue Eutiner Festspiele, the ensemble will perform in the historic medieval castle at Schloss Eutin.

The castle concert series begins with a matinee of non-traditional jazz repertoire ranging from Purcell and Mahler through Radiohead and Super Nintendo. The group also performs a gala concert exploring arrangements from the Festspiele's mainstage productions with improvisations on pieces by local-born Carl Maria von Weber, and a world-premiere of Perry's vibraphone concerto. Beneath 17th-century portraits within the castle, Netter and Suggs present a recital of 17th-century German and Italian vocal monody side-by-side with their own compositions and excerpts from Messaien's Quartet for the End of Time composed only a few hours to the south.

The tour and concerts are in part sponsored by Volksbank Eutin as well as the local Eutin Tennis Club as part of a larger effort to begin a summer music academy in coordination with the Eutiner Festspiele.