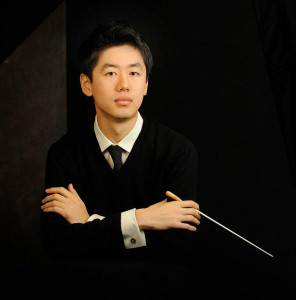 The San Diego Symphony announced Wednesday that Kensho Watanabe '09 BS, '10 MM will serve in the new role of conducting fellow. Sameer Patel will be the orchestra’s new assistant conductor.

Jahja Ling '80 MMA, '85 DMA, who has been the music director of the San Diego Symphony, plans to step down at the end of the 2016–2017 season. Ling was recently honored with YSM's Distinguished Service Award.

Watanabe, who recently finished serving as conducting fellow at the Curtis Institute of Music, was chosen for a similar role in San Diego, where he will conduct a limited number of concerts.

“I am extremely grateful to Maestro Ling and the San Diego Symphony for committing to my development as a conductor,” Watanabe told the Times of San Diego. “I was struck by the energy, drive and outlook of the entire organization, and I am looking forward to developing this intrepid partnership while getting to know the San Diego community.”

About Kensho Watanabe
Japanese-American conductor Kensho Watanabe recently completed his tenure as the inaugural Rita E. Hauser Conducting Fellow at the Curtis Institute of Music, under the mentorship of Philadelphia Orchestra Music Director Yannick Nézet-Séguin. In 2014, Kensho made his debuts with the Orchestre Métropolitain in Montréal and the Alabama Symphony Orchestra, as well as a repeat appearance with the Eastern Connecticut Symphony Orchestra and Ballet in their productions of Nutcracker. With the Curtis Opera Theatre, Kensho has led productions of Tchaikovsky’s Iolanta and Viktor Ullman’s Der Kaiser von Atlantis.  He has also served as an assistant conductor on many other Curtis Opera productions, most notably Ariadne auf Naxos, Gianni Schicchi, and Faust.

Future engagements include assisting Yannick Nézet-Séguin on Strauss’ Elektra with the Montréal Opera, and cover conducting assignments with the Minnesota Orchestra and San Diego Symphony. Kensho has previously served as a cover conductor for the Philadelphia Orchestra, Atlanta Symphony, Alabama Symphony Orchestra, and Symphony in C. He has served on the staff of the Greenwood Music Camp since 2007, and currently serves as the Orchestra Conductor.  He also performs regularly with the Philadelphia Orchestra as a substitute violinist.

Kensho is a conducting graduate of the Curtis Institute of Music, where he studied with distinguished conducting pedagogue Otto-Werner Mueller.  Additionally, he holds a Bachelor of Science degree from Yale College, and a Master of Music degree in violin from the Yale School of Music.