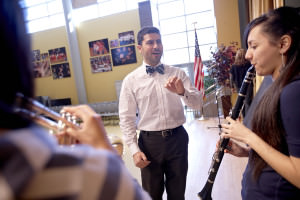 It’s a Saturday morning. But at Wilbur Cross High School, the joint is jumping.

The school lobby is scattered with violins, cellos, basses, and their respective cases, as a classical ensemble sets up chairs and prepares to rehearse. Down the hall in the school’s band room, a trombonist blows the main melody from “Summertime,” and then a roomful of brass and other instruments chime in, finding their collective way through the Gershwin classic. A glee club is sitting in a different classroom, planning the next practice session. “I gotta go early,” one student says. “I gotta be in college,” says another. This leads to a discussion about responsibility and collaboration.

All this is part of Music in Schools. The Yale program, which began in 2007—a gift from the Yale College Class of 1957—connects student musicians in New Haven public schools with student musicians in the Yale School of Music. The Yale graduate students acquire teaching skills and learn how to assist the public-school music teachers; the New Haven students get to learn more music. Rodríguez, as lead teacher, oversees them all. A trombonist, he studied music as a child in Bogotá, Colombia, as well as France, and later developed music programs in Colombia, Panama, Guatemala, and Argentina that, he says, reached thousands of kids.

One of the key Music in Schools projects is the All-City Honors Ensembles program, which runs ensembles for some 200 public school students on Saturday mornings during the school year. The other is the Morse Summer Music Academy, a program that this year had 134 kids. (It is named not for the college but for its donors, Enid and Lester Morse ’51.) They meet for five and a half hours every weekday in July to study music theory and rehearse. Every week, they learn at least four new pieces of music and perform in concerts, sometimes with guest conductors from the New Haven Symphony Orchestra or the Yale Glee Club, Concert Band, or Collection of Musical Instruments. “Each musician is part of a chamber music ensemble,” Rodríguez says. “Each musician is a soloist. There are all kinds of possibilities to work with so many different students.”

For Rodríguez, who has been lead teacher since 2011 and taught in the program as a Yale School of Music student, Music in Schools is a way to serve New Haven. “I have seen how music is a powerful tool of inclusion,” he writes in an e-mail, “an opportunity for personal and social development, an outlet for young people desperately needing a way to express themselves, and also an incredibly beautiful way to invest your time and energy.”