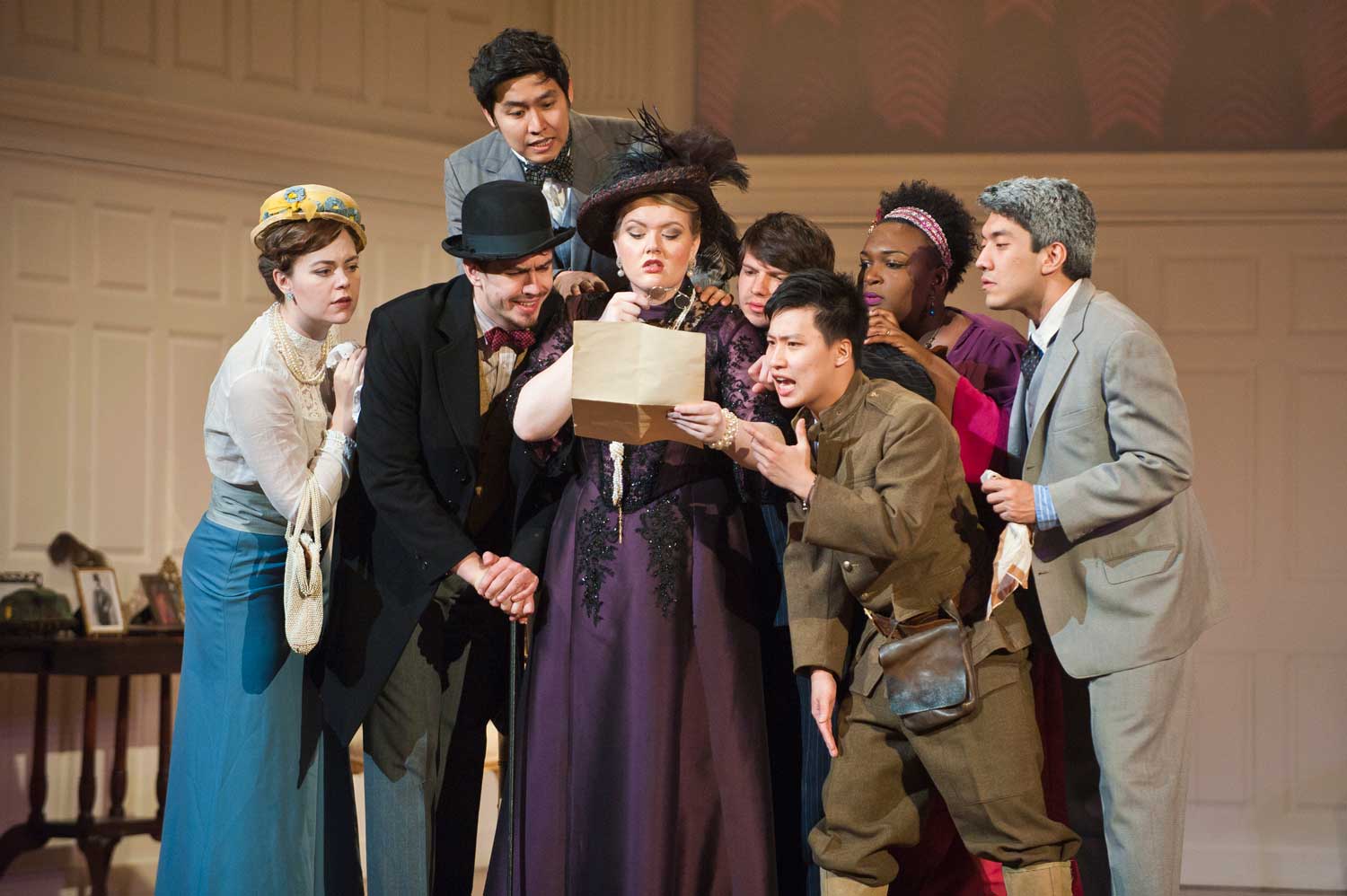 Doris Yarick Cross for more than thirty years has directed Yale Opera, a division of the Yale School of Music. She and her husband, Richard Cross, serve as the voice teachers for the program, a mammoth task. Such major artists as Matthew Polenzani, Patrick Carfizzi, Tamara Mumford, and Christian Van Horn have graduated from the program, which in every school year has fifteen artists, chosen from hundreds of applicants.  All of the singers in this “class” are working on their Master of Music degrees.

Three days in New Haven demonstrated to me the viability of the program,  allowed me to experience two performances of opera scenes, and have several hours with all the young artists involved. Though the majority of artists, all in their twenties, come from the United States, recruitment is international. Young singers from Poland, China, Italy, and Canada joined their American colleagues. The two evenings of opera scenes at Yale’s Sprague Hall, fully staged and costumed, surveyed the repertory from Handel to Britten.

The professionalism of what was presented to the large audiences at Yale’s Sprague Hall on November 7 and 8 testified both to the quality of teaching and the care of selection of the young singers. The bare stage had only a few chairs on it (which in two scenes were grouped together and covered with a tarpaulin to form the necessary wall separating Rigoletto’s house from the street and the den for the Vixen in the Janacek opera). Innovative projections on the rear stage wall by projection design supervisor Wendall K. Harrington and clear direction by Marc Verzatt created the different milieus of each excerpt. There were three insets in the neutrally colored wall. In each of them projections appropriate to the scenes created the right atmosphere. Credit was given for design of the projections to the Yale School of Drama Projection Design program; the idea clearly for Yale Opera is to bring as many aspects of Yale into what they do as possible. (Two complete operas will be given in the winter and spring.)

John Carver Sullivan created appropriate costumes, some contemporary and some with period touches, the cleverest being those for the Fox and the Vixen in the excerpt from Janacek’s Cunning Little Vixen. The singers were thoughtfully directed by Verzatt who also supplied good titles for each selection, including those in English. The hall was filled for both performances, with many Yale college students in attendance as well as community supporters. The operas excerpted, in addition to Rigoletto and The Cunning Little Vixen were Semele, Midsummer Night’s Dream, Cosi fan Tutte, Hamlet, Don Giovanni, Don Pasquale, and The Merry Widow.

The most difficult pieces for young singers turned out to be the most successful. The Rigoletto excerpt began with the beginning of the second scene of Act I and concluded with the Gilda-Rigoletto duet. Zhiguang Hong dispatched “Pari siamo” smoothly as well as the duet with his daughter, played and sung well by Meechot Marrero, while his scene with Sparafucile (Andy Berry) had the combination of darkness and comedy that Verdi wanted. Berry’s low F at the end of that scene testified to his being a true bass. Andres Moreno Garcia sang the Duke’s part brightly, with ease.

The Don Giovanni excerpt on Sunday afternoon extended from the entrance of Masetto and his friends to the exit of Leporello after the sextet. Well prepared and very well sung, it was quite involving. Pawel Konik showed what the Don needs vocally; more important his charisma suggested that he could in the future take on the whole role successfully (he also sang well in the patter duet from Don Pasquale, not as natural a role for his stage personality.) In the Mozart segment Jin-Xiang Yu offered a splendid “Vedra carino” and Berry again did a fine job, this time as Leporello.

The Cunning Little Vixen excerpt received really effective lighting as well as a convincing makeshift den and good animal costumes for Yu (the Vixen) and Evanna Chiew (the Fox). I have often seen lighting designers work to create forest scenes, but Doug Harry accomplished the milieu better than I can remember, even on a basically empty stage. The two young women sang their roles effectively, acted charmingly, and really conveyed the sense of the love affair between the foxes. The two performances concluded with a great pastiche from Lehar’s Merry Widow, with dialogue in English and singing in German, good practice for the young artists. It was really charming and made me want again to attend a performance of the great operetta. Natalia Rubis, who had on the previous evening turned in a fine Semele, particularly her rendition of “Myself I shall adore”, sang a splendid Vilja and generally created a believable Hanna, with Dean Murphy a charming Danilo. The other standout in the selection presented was the Camille, Garcia. All fifteen singers in the program took part in the Widow selections and clearly had a lot of fun performing it.