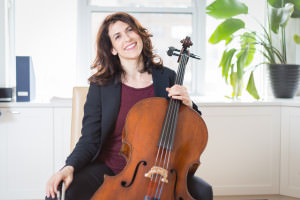 It was on her mind for at least 20 years. Inbal Segev had been preparing, practicing, gearing herself up to consummate her musical career by climbing what she called “the Mount Everest for cellists.” Recording J. S. Bach’s complete cello suites constitutes the pinnacle of her internal journey as an artist so far.

The Bach cello suites are so challenging because, as Segev said, they are so simple and yet complex, so structured and yet so free. It is something that any great cellist is expected to accomplish.

She released her album, “Inbal Segev: Bach Cello Suites” this fall. Her contagious laughter throughout the interview seemed to counterbalance her self-admitted perfectionism and a tendency to be too hard on herself. Then she said, “But I’m better now. … I put the CD on and I actually enjoy it.”

As she played snippets of various pieces in her home, including the first Bach cello suite, prompting goose bumps, her cello gave an incredibly full warm sound. It was like a deep burgundy, full-bodied cabernet sauvignon, with a slight hint of sweetness. Her pet parakeets started chirping excitedly. Segev laughed.

While every cello has its own personality, ultimately the musician affects the instrument. “I sound very similar on different cellos. After a while, after I get used to it, it is my sound,” Segev said confidently.

When asked what music means to her, she said, “It transforms you on so many levels. It makes us better people. It’s beautiful because it’s good,” she said articulating “good” at length, smiling and then giving a hearty laugh.